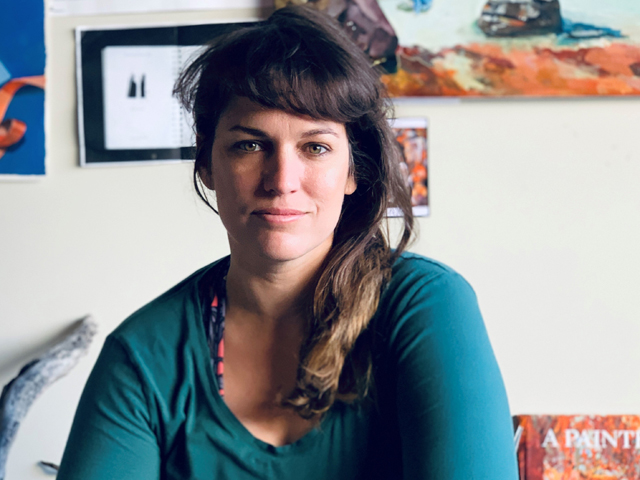 As part of BP Australia's centenary celebrations, six artists from around the country have been commissioned to create bespoke artwork representing the land, and BP's past, present and future commitment to Australia.

The collaboration aims to celebrate both the last 100 years of BP energy in Australia, and look forward to the next century.

The six artists will work across a variety of media and use their personal style to produce the final pieces, an individual interpretation of BP's place within the Australian community. The final pieces will be revealed at the end of July.

Nicole Van Dijk is an Australian artist who has held a love of drawing and painting from a young age. Initially, in order to make art her career, Nicole ventured into the world of graphic design, later completing a master's degree in education, so she could divide her career between teaching and design.

Her concept for BP centers around creating a painting that depicts the landscape of Papunya, one of the communities hardest hit by the petrol sniffing epidemic. She plans to touch upon the lives saved due to the introduction of Opal, the low-aromatic fuel developed by BP to tackle the problem of petrol sniffing in Australian communities.

Question: How does it feel to be selected as an artist for the BP Australia's centenary celebrations?

Nicole Van Dijk: It feels great to be selected - it was such an open and generous brief. I felt like I could really take some time to follow my own path of interest and create a meaningful piece of work. Ordinarily when commissioned the creative field is tighter, and based heavily off previous examples of work. I felt like I could take an honest and outside view of BPs contribution to Australia and create an artwork that reflected how I saw their involvement.


Question: Can you tell us about the piece you created to represent the land, and BP's past, present and future commitment to Australia?

Nicole Van Dijk: The artwork is titled 'possible landscape' and is based on the Opal Story - A low aromatic fuel developed by BP in response to the petrol sniffing crisis. The oil painting depicts a landscape in Papunya, one of the communities hardest hit by the petrol sniffing epidemic. The oil painting is a large square composition facing a cliff with mountains in the background. At the base of the cliff is a waterhole - still water reflecting the cliff face. Growing on the waterhole, a bright swathe of green reeds. The painting uses the strong, rich colours of the Papunya landscape, and there is a sense of stillness in the composition. I have been following a theme of 'impossible landscapes' where i have been creating moments in a landscape that are impossible - children playing in places that are long gone, lakes that have been submerged, family moments that are impossible to create. I paint these moments in a realistic style, and it's not until the viewer understands the story that they become aware that these moments could never have happened, or are impossible. However, for this BP 'possible landscape' I shifted this theme. The painting is still realistic but it shows Papunya as it exists today. This landscape is not submerged - it is alive. The waterhole still exists, the green reeds flourish - and there are people living here who may not have been had Opal fuel not been introduced. It is a possible landscape.


Question: What inspired your particular take on this project?

Nicole Van Dijk: I felt that Opal was a genuine good news story and was at the heart of BPs offer. When considering the direction to take I was struck by a line from an email written by Chris Tangey "As I write this, I can see an 11 year old girl thought he window with half a coke bottle containing petrol strapped over her nose and mouth. I don't know if she will make her 12th birthday. Is there anything you can do?" And of course that is SO compelling, and knowing that BP was the only company to respond to his email inspired me to investigate further.


Question: Did you conduct any research prior to beginning this piece?

Nicole Van Dijk: Yes! Research is everything! If I haven't spent enough time in the research stage, the painting will always feel a bit wonky, or unsupported. Authenticity is very important to me. I needed to feel comfortable painting a place that I had never actually been to, and working with such sensitive material. I spent a lot of time researching the introduction of Opal fuel. I wanted to feel confident that I had considered the impact of Opal from all sides.

My personal view of Opal was that it gave communities a break. It gave them time to breathe. We all know how complex these issues are, and the idea of a corporation telling communities what to do is potentially inflammatory, BUT from my research it seemed that for too long the communities had been asked to come up with the solutions - and they were in crisis and needed help. Creating a low aromatic fuel gave them space to start working though the issues. 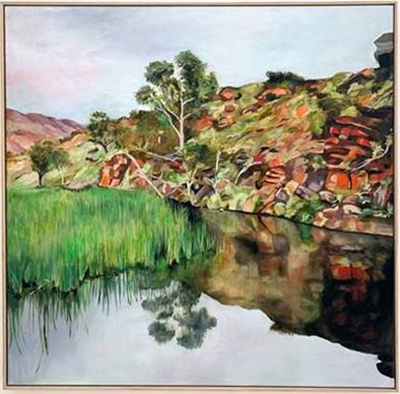 Question: Why was it important to you, to use your art to save lives and fight addiction?

Nicole Van Dijk: I wouldn't say that it is important to use my art in that exact way. I did find this Opal story very powerful but I feel like my response was more about being a visual storyteller. By creating this piece of art, it means that more people may come to know of the Opal story, and engage with the issues, rather than skimming a written piece on it. I've been surprised how few people do know about this story.


Question: Where do you find inspiration when creating pieces of art?

Nicole Van Dijk: Inspiration is an interesting idea. Really, the harder I work, the more inspired I am. If I can still turn up at the easel even though I am in the grips of self-doubt, then inspiration will follow. Currently I balance a career as an designer, artist and teacher and I find the variation inspiring. I love engaging with people far too much to be a solitary artist, and then I relish the quiet time after long days of teaching. And design really underpins everything I do. Nature restores me (cliché, but true) and I have found myself drawn to landscape painting. I love the pure aesthetics of it. It dials down the noise of my mind to study the variations of colour in one leaf, or to create a composition of tangled branches. Painting really does bring me into contact with the curiosity and wonder of my child self. I'm really grateful for that.

Nicole Van Dijk: A good day would be going for a run in the morning, getting ready and dropping off my daughter to kinder before having some coffee in the studio and getting my paints ready (kind of like doing the food prep in the kitchen) Then painting in blocks of about 2 hours with small breaks in between where I'd have a coffee or chat to the neighbours. A final afternoon effort before picking up my daughter and starting the evening routine.


Question: Where can we see more of your work?

I was fortunate enough to be a finalist in the Glover Prize this year so you can find my work amongst some amazing artists here: https://www.johnglover.com.au/exhibitions/archive/glover-prize-exhibition-2019

Nicole Van Dijk: There will never be a good time. Now is a good time. Start small, but just start. There is room for everyone. Be kind.