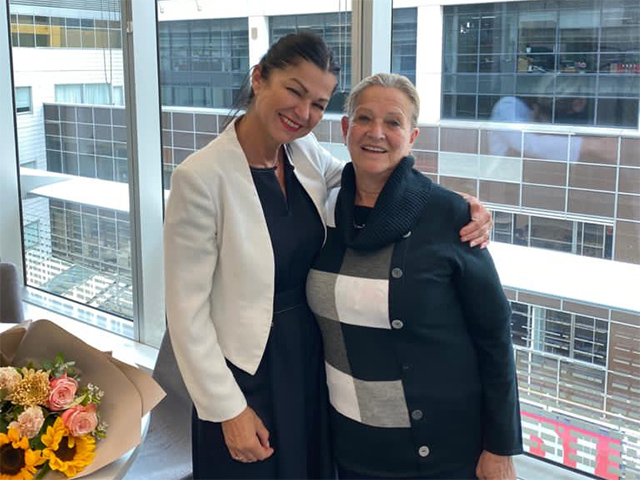 Olga Romero fled Chile in 1977 due to political turmoil and unrest including many riots and bombings. In order to be safe, she left Rancagua (close to Santiago) for Melbourne with her husband Carlos and three young children - two boys and one girl.

Olga fell in love with Australia and still lives in Melbourne (Gladstone Park) to this day. However, things were very different for her in Australia. Back home she was from a wealthy family and was used to having a nanny and house staff. In Australia, Olga had to work long hours in a factory because she couldn't speak English. Yet for Olga it was important to work hard to give her children opportunities in life.

"When we came to Australia, we initially we came to a hostel in Springvale. It was a housing commission apartment and very different to how I grew up. We worked very hard in the Ford factory. It was an overwhelming process moving from Chile to Australia but thankfully we were eventually able to afford a house to raise our children in," says Olga.

Olga's daughter Marcella has grown up to be an incredibly successful Australian business woman. From her one-woman home office 20 years ago to a flourishing business with more than 100 offices nationwide, the Arriba Group is reshaping the future of thousands of Australians through return to work, disability employment and NDIS allied health services.

Olga says that it doesn't surprise her that Marcella has become so successful.

"I have to say that I am very blessed, Marcella has always been such a good daughter. From a young age she was very clever and wanted to help everyone! In Chile it was normal to compete against the class and she always got the top spot. But, most importantly, she has a very good heart and she has taken that into what she does now."

Marcella lives in Sydney, currently raising her own family with her husband Craig in Seaforth. Despite living in different cities, Marcella and Olga are very close, speaking at least twice a day. When Marcella started her business and had her first child Jasmine, Olga flew up to Sydney from Melbourne every Sunday to Thursday.

"I can't believe Mum used to fly up every week! She is simply incredible. In those early years, people thought she lived in Sydney because she was always around, attending school sport, picking up the kids – everything!" says Marcella.

"I was working out of my loungeroom and Mum helped me with the administration side of the business. Back then, there was a lot of paper work - we did all the client files manually. Mum was super quick at getting everything organised. For every 10 files I would organise, she would have done 50 - she's says I was too slow!" laughs Marcella. "I couldn't have done it without her."

Marcella credits her mother for instilling values in her that have put her in good stead.

"Mum has really experienced life at all levels. She came from a wealthy upbringing in Chile but then had to work in a blue-collar job, as a cleaner in a factory. She has seen it all and is very perceptive. She taught me to always respect and value people regardless of where they come from or what they do," says Marcella.

"She also instilled in me the importance of giving back and just generally being a good person. That includes always being transparent. You always know exactly where you stand with Mum, even more so than me. There is no sugar coating! If doesn't like something, she will say it."

Marcella says her mother has guided her in business through her ability to read people well.

"My mum didn't have the same opportunities that she enabled me to have. She got married at 15 years old and did not have the chance to go to university or become a professional. Yet she is one of the most emotionally intelligent people I know and very street smart. For example, she can always read what is going on behind the scenes with people and has often given me sage business advice when it comes to the people I work with."

"I take my inspiration from my parent's journey. I don't believe that success comes easily. It comes from hard work, persistence, late nights, perseverance, sacrifices, rejection, discipline, failure and taking educated risks. And importantly, no matter what you do, you have to do your best and take pride in what you do," says Marcella.

Olga is proud of the woman Marcella has become.

"She honestly is such a good person – I can't complain! If something is wrong, she will drop everything for those she loves. She is always willing to listen and always says and does the right thing. I am not surprised at how well she has done because she has always worked very hard. I'm very proud of her," finished Olga.