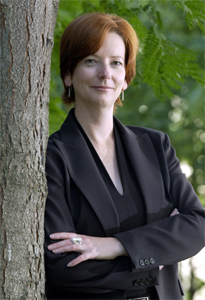 Meet the woman behind the politics

In 10 years of parliamentary life, Julia Gillard has rapidly risen through the state and federal ranks, tackling the tough portfolios and the more controversial issues to win the respect of her party and opponents alike.

At the next Melbourne Business Women's Luncheon, we feel privileged to have this rare opportunity to get up close and personal with the woman behind the politics.

Over lunch, Julia will discuss why women do make a difference.

The stereotypes to avoid.

The importance of a work/life balance.

The power of your passions.

How it's unladylike not to "fight".

And despite advancements in recent years, why real equality has remained elusive in the nation's workplace, its boardrooms and, indeed, in parliament.

Insightful, funny and refreshingly candid, join us for an audience with Julia Gillard. The presentation will be followed by questions from the room.

This rare event promises to be a sell-out!

One of our nation's most powerful women

Julia was born in Wales and immigrated to Australia with her family in 1966. She spent her childhood and adolescence in Adelaide before moving to Melbourne for both her studies and student politics.

Having successfully completed her LLB/BA at the University of Melbourne with an Economics major, Julia began working for Slater and Gordon in 1987 and was admitted as a partner in 1990.

Six years later, Julia ventured into the political arena, becoming chief of staff to the Victorian Opposition Leader. It was the first of many positions in the Victorian branch of the ALP. In 1998 she was elected the Member for Lalor.

Her portfolio has included Population and Immigration (2001), Reconciliation and Indigenous Affairs (February 2003) and since July 2003, Julia has been the Shadow Minister for Health. The latter was extended in 2004 to include Manager of Opposition Business.

This rare event promises to be a sell-out!