A Place to Call Home – it's what lead actress of the show, Marta Dusseldorp, would like to see for refugees worldwide.

And it's just that commitment to global refugees' safety and wellbeing that will see her named a Special Representative by Australia for UNHCR at the organisation's World Refugee Day breakfast next Friday.

Question: Can you talk about your role as a Special Representative by Australia for UNHCR? 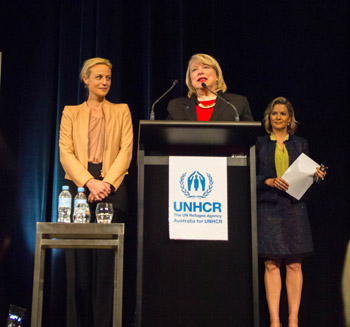 Question: What does this role mean to you?

Marta Dusseldorp: I think it's a fundamental human right that all children have a childhood. As a mum, it's a very personal role. Over time, I hope to build this role as I get even more involved with Australia for UNHCR and travel to meet refugees on the ground, because it's their individual stories that make up the greater picture. A global insights report by released by UNHCR this week has revealed that there are 60 million people displaced in the world today, which is more than there was after World War II. It's a dramatic situation, which we all must address.


Question: What have you learnt whilst being involved with UNHCR?

Marta Dusseldorp: I'm still sinking into my new role with Australia for UNHCR but I'm hoping to sit at the feet of incredibly intelligent, passionate people like Naomi Steer, our National Director, and learn as much as I can and help wherever I can, to assist in the plight of refugees.


Question: What do you hope to achieve as a Special Representative by Australia for UNHCR?

Marta Dusseldorp: To spread the word of the vital work which UNHCR does and encourage Australians to join this quite solid walk towards some kind of resolution for refugees. At the very least, support giving refugees basic access to humanitarian aid and the hope of a future and ordinary life, after living in extraordinary circumstances.


Question: How do you use your role on A Place to Call Home to promote global refugees' safety?

Marta Dusseldorp: Sarah Adams who I play in APTCH is a Holocaust survivor, so there is an element of being a refugee in her own country. I've used my research of Sarah to help me understand better exactly the emotional landscape of someone who's gone through a traumatic experience.

But more than that, meeting Australia for UNHCR Special Youth Representative and former refugee Yarie Bangura and listening to her story, and also other girls from Sierra Leone I've worked with recently, has been such a privilege and given me great insight into just how much courage and resilience these young women have.


Question: Can you share your own insights regarding the issues facing refugee parents/children?

Marta Dusseldorp: No child should have to comprehend violence. Seeing their parents shot in front of them, being stabbed in the head with a machete, then buried alive and having to have their 11 year old sister dig them out. And how do you come back from something like that?

Alongside the 72,000 Australia for UNHCR donors, I would like stand by those kids and with those kids. And certainly, having children, it's mindboggling to imagine that a seven year old has to take that into their life. I'd like to say that they're not alone and whatever I can do to help, I will. But UNHCR are doing it, so by supporting them, you are in turn helping these kids to find a future like Yarie received and has grasped onto and found a healing of sorts. So hopefully, they can too.


Question: What have you learnt from your role on A Place to Call Home?

Marta Dusseldorp: Well, I think reading Primo Levi's -If This Is a Man', who survived Auschwitz and Sarah Helm's recently published -If This Is a Woman', which is a play on that title, about being inside Ravensbrück, really immerses you in this horror.

It's not just about being Jewish, because especially in -If This Is a Woman' there's a lot of talk about anti-socials and gypsies and Poles, and the Germans were arrested too. You really get a sense of being inside these places where liberties are taken and violence is everyday.

Phillip Roth called Primo Levi's book one of the century's truly necessary books, so in reading those and playing this character, it seems that it's already such a long time ago since then and yet it's still happening every day. So it's obviously something that needs to be talked about and continuously so.

Marta Dusseldorp: Well it's very ordinary, in the sense that it's very lucky and very simple and full of love and ease. I do what I love and my children are healthy and I've got a great husband, so it's nothing to describe. So I feel very, very, very lucky.

A Place To Call Home DVDs

Thanks to Universal Sony Pictures Home Entertainment here is your chance to win one of 10 x A Place To Call Home...

The first few minutes of season two will continue to keep everyone curiously guessing. A seemingly typical...

To coincide with the home entertainment release of A Place To Call Home, Universal Sony has partnered with...