A young father who will soon be unable to speak, swallow or breathe is the face of a new national campaign to raise awareness of motor neurone disease (MND) and funds for the MND Research Institute of Australia (MNDRIA).

Adam Regal of Kiama, NSW is living with MND, an unstoppable and fatal disease that kills two Australians every day. The average life expectancy is just two to three years after diagnosis.

'MND is such a brutal disease for which there's no treatment or cure, yet. Research is the only tool we have to understand and overcome MND," says Mr Regal.

'At the moment MND is affecting just my legs, but in time I'll be unable to complete the simplest tasks like hugging my kids or dressing myself."

The national campaign to run in May will span TV, radio, online as well as an in store promotion through corporate sponsor, Harvey Norman.

The campaign reveals the reality of living with MND and appeals to the public to put a price on the ability to perform everyday tasks like drinking a cup of coffee or saying -I love you' to family: 'Put a Price on it. That's your donation."

'Devastating doesn't begin to describe the effects of MND. It may be too late for me, but I'll do everything I can so future generations never have to go through this. Research provides us with the hope for a future without MND," says Mr Regal.

While researchers are making inroads, funding is still needed to better understand MND and move towards discovering an effective treatment.

Key Facts about MND in Australia:

- MND is a progressive, terminal neurological disease
- In most cases the cause is not known and there is no effective treatment and no known cure for MND
- People with MND progressively lose the use of their limbs and ability to speak, swallow and breathe, while their mind and senses usually remain intact
- Average life expectancy is 2 to 3 years after diagnosis
- Around 2,000 people have MND in Australia

Adam Regal is a 31-year-old father of two who is living with MND in Kiama, NSW

Question: What do you hope to achieve from the current MND awareness and fundraising campaign?

Adam Regal: I just hope that the profile of Motor Neurone disease and the devastation that comes with a diagnosis can be changed. Currently there is no effective treatment and no known cure. The campaign tells it like it is. There is a price that comes with MND and the ability to live with it. Holding a cup of coffee or being able to dress your self are small things we take for granted; that I once took for granted. Hugging a loved one. These everyday things are slowly taken away as progression spreads throughout the body. The ultimate goal would be for an end result to change. Life. To stop progression and bring much needed awareness and funding for research into the public eye. Research is the key the only way we can have a future without MND is through research. www.endmnd.org.au That is where it will end. 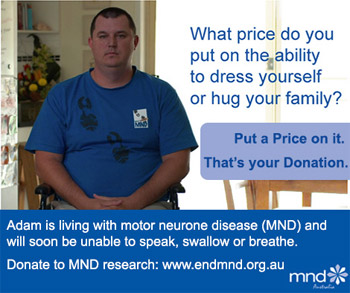 Question: What was it like to film this campaign?

Adam Regal: The campaign was easier filmed then what I thought it would be. Bernice the mastermind behind the campaign is a fellow sufferer of MND. Her progression is quite rapid and when she asked if I could get involved I just couldn't of said no. Bernice's voice is starting to deteriorating quite fast so it's hard for her to speak. Her drive to make a difference and look for a future without such a cruel disease, like other MND patients made it a lot easier to film.


Question: Can you talk about your experience with MND?

Adam Regal: I was diagnosed on the 11.12.13 at the ripe old age of 30. I had just lost my father from MND only 12 months prior and an uncle 10 years prior to that; they too where in the prime of their lives. While 90% of cases are sporadic (meaning anyone can get it) my case came under the other 10%.

I've yet to meet a sufferer from another family that has familiar MND in person. I have met a lot of people with sporadic MND. A lot of younger people all in their 30's and 40's that have all of a sudden had MND come into their lives uninvited. In the last 25 years cases have doubled.

My experiences with MND haven't ended well. Families are left devastated and heartbroken from such an aggressive disease.


Question: How does MND affect you on a daily basis?

Adam Regal: Currently I need help to put my shoes and socks on. I also have trouble with balance and weakness in my legs. I get quite tired quickly and have to use walking sticks on short walks and a wheelchair on longer walks. I have to sit to shower.

It is slowly taking away the things I took for granted like running around with the kids and even mowing the lawn. Cooking there is a heightened risk of being injured so I have to choose what to do before doing it. Stairs and ramps are harder to walk up and down. We as a family have had to adjust to the changes and it is part of the MND journey.


Question: Can you talk about your MND symptoms?

Adam Regal: I was training with my son's football team and I noticed I had a limp, like I had been injured. I couldn't remember being injured and thought it was a little weird at the time. I came home and I was looking at my toes and noticed I couldn't move one of them like I could only a month ago. My work mates also had mentioned I was limping too, I thought they were having a go at me. I booked in to see my GP and he sent me for tests, a lot of tests. I had twitching and cramping in both my legs and there was muscle atrophy on my foot. Over the course of a few months the Atrophy, twitching and muscle weakness got worse until they finally pin pointed the issue.... MND.


Question: What advice do you have for other Australians diagnosed with MND?

Adam Regal: I've meet some brilliant people living with MND and they live life to the fullest. Sometimes you may feel alone, just know that you're not; keep Positive and live, laugh and enjoy what you have. Enjoy time with family and mates. Every MND case is different. Rule MND and don't let MND rule you. You be the boss of it.

Get your family and mates involved. There's always a purpose to fighting a good fight and what better time than now, show the people who care most that life doesn't end with a diagnosis of MND.


Question: Can you talk about the support you've received from MND Australia?

Adam Regal: One of MND Australia's state MND associations, MND NSW has helped with organising Hydrotherapy which has helped keep the body moving. They have also helped with equipment like shower chairs and manual wheel chairs.

They have also spoken with my family and have asked them and myself to come along to support groups. My wife was quite scared of going to them at first. Didn't know what to expect she said. But she went and has picked up a lot of useful ways to deal with, say for instance. If I trip over or fall. She has also gained a network of people that have been through it and can guide her not only physically level but mentally too. MND NSW has helped not only with my journey with MND but my Familys journey with it which is very important to me.

Katie was just 19 and in the second year of a Bachelor of Early Childhood degree at Melbourne University, when...