To coincide with the home entertainment release of A Place To Call Home, Universal Sony has partnered with HomeAway.com.au – the largest selection of holiday accommodation around the world -  to offer one lucky reader and their plus one the chance to win a 2 day retreat in a beautiful, idyllic country home in their home state, valued up to $2,000.


A Place to Call Home Season 2 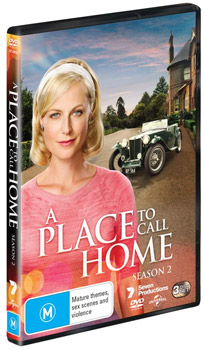 A Place to Call Home, the number one Australian drama for 2013* returns and is set to be bigger and even more dramatic than ever before in Season 2. Starring Marta Dusseldorp, Noni Hazlehurst, Brett Climo, Abby Earl, Craig Hall, Frankie J. Holden, David Berry, Matt Levett, Sara Wiseman, Arianwen Parkes-Lockwood and Aldo Mignone, the compelling story of a mysterious woman perched between the harsh legacy of World War II and the hope of a new life in Australia, is available on Blu-ray™ and DVD from July 17, 2014.

Last year's epic finale saw the lives of the Bligh family imploding. After paying off Bert to keep him quiet about his son James' sexuality, George was furious when he attempted to extort more money for him. Shortly afterwards, Bert's body was seen floating on the surface of the river. Who killed him?

The first few minutes of season two will continue to keep everyone curiously guessing. A seemingly typical morning at Ash Park is revealed to be something completely else entirely.

Sarah moves into Ash Park and works to prove herself a fitting wife-to-be for George, while his mother Elizabeth plays a devious waiting game to see what Regina will unearth about Sarah's past in Europe. Little does Sarah know, Elizabeth will uncover information that blows life as Sarah knows it sky-high.

With more mystery, drama and secrets to be revealed, Season 2 is sure to have viewers on the edges of their seats. Nominated for Outstanding Drama Series at the 2014 Logie Awards, A Place to Call Home Season 2 is a must-own Australian drama available on Blu-ray™ and DVD from July 17, 2014.

As the prize is the house for 2 people for two days in their own state, the number of rooms will depend on the property.
Certain peak periods may not be available and the property is subject to availability.
The total prize value is up to $2,000.