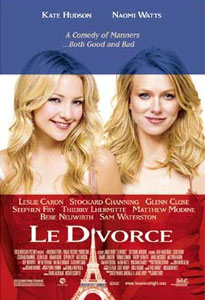 Kate Hudson was looking gloriously pregnant in a Los Angeles hotel room. Glowing in a rich red pants suit, she willingly showed off her slight pregnant belly. Ironically, when we met a few months ago during the Alex and Emma junket, though she was pregnant, at the time she insisted that she was looking forward to motherhood. Kate knows how to keep a secret. "I mean, I think everybody knows you don't talk about pregnancy until you're ready to talk about it. You know? I mean, women have problems and complications all the time, so when it's time to talk about it, it's time to talk about it." And what better time to talk about it, but at yet another press junket, this time for Le Divorce, in which she plays one of two American sisters in Paris the other played by Aussie Naomi Watts. Hudson, who is happily married to Black Crows singer Chris Robinson, and thus far, she says with her trademark luminous smile, her pregnancy is going quite well, thank you very much, and grandmother Goldie Hawn has taken to her new role typically. "She's ecstatic and just in mother mode and my dad is gonna be a mess, as he's so excited," she says, laughingly. Hudson admits that her major food craving thus far is "anything sour, plus pickles, sauerkraut and peanut butter." Kate also managed to quit smoking, which "wasn't as hard as I thought it was going to be. I'm actually enjoying it and I don't know if I'll smoke again," she says.

As busy and exciting a year as it has been for Hudson, personally, it has been quite the year professionally. Le Divorce is the actress's third film to come out this year, and afforded her the chance to spend some time in Paris. Hudson agrees that in many ways, Le Divorce remains an accurate portrayal of an American in Paris, because "I was experiencing it as the character was experiencing it, and it felt very similar to what I saw in the movie. It's like me except I wasn't having affairs," she adds laughingly. The actress says that the film also explores the reality of relationships, "that they're never what you expect to be and nor should they be. While Hudson's previous two films were more Hollywood mainstream, Le Divorce is, after all, Merchant Ivory, which is unique in itself. "Jim [Ivory] takes a very strong artistic license, meaning he never asks why this person's wearing that $10,000 coat. He shoots in the most phenomenal locations where it's so strikingly beautiful that you walk into these places and you go: This is gorgeous. Now, it might not necessarily be a place that as a young girl in Paris you'd actually go, but nobody asks the questions because it's so beautiful and that to me was a big part of a Merchant/Ivory type picture. It's very rich. We were in every famous restaurant that was ancient and that to me kind of defined Merchant/Ivory to me. When I see Merchant/Ivory pictures or the ones that I love, I think of very rich scenery."

While Le Divorce deals with the ups and downs of relationships, in her own life, Hudson is a happily married 24-year old, albeit an unconventional one, she insists, which she says colours her view of marriage. "I don't think we re a normal married couple. I wish every couple could be like us or married for those types of reasons and not for the other types of reasons and I feel like I just- - whatever flows. I honestly come from a family where my parents have been together for 20 years and aren't married, so I don't have much conventional experience. Marriage is a beautiful thing and honestly, getting a divorce is going to be horrible and hopefully that doesn't happen"