Jennifer Aniston Rumor Has It Interview 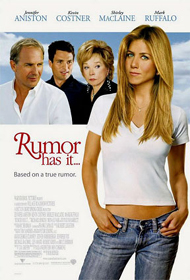 Aniston Classy at the end of a Rocky Year.

It may be the end of a rough year for former Friends sitar Jennifer Aniston, first with her much publicised split from Brad Pitt, then with the tabloid photographers shooting topless photos of the actress in her backyard. In a hotel room to promote her return to mainstream comedy as the star of the Rob Reiner-directed Rumour Has It, the beautiful 36-year old says she has learned that the only way to cope with such events, is to adopt a sense of humour. "Theres nothing embarrassing about anything. Ill tell you, at this point, theres such a freedom in a weird way. You can just say, here I am. This is it. It was like I was saying to Shirley today, well, I might as well pull my pants down at this point, since theyve seen everything else," Aniston says, laughingly, glibly referring to the aforementioned photograph. Now relaxed, tanned, and wearing a black, sleeveless, high-neck tank top and patterned brown shawl with blue design, jeans, Anistons own sense of humour, about her up-and-down-year "comes since my childhood, because, really, its all boring." Yet, a star who handles the press and thorny questions with perennial class, adds that she has learned to attain a degree of emotional stamina from her own family, "particularly my parents and I learned by example of what not to do by watching them. I watched my mother be very bitter and angry throughout a divorce, never let it go and waste the whole second half of her life, so I thank her for that unconscious sacrifice of what not to do. I think that its important to take responsibility, because its so easy to blame, to point to be victimized - thats just a waste of time."

Anistons public support during her divorce, also gave her food for thought. "On an energetic level, I feel its wonderful and very comforting. I was actually surprised to see that kind of a reaction, but I really did kind of tune out all of that; to reading things and hearing things. As much as positive stuff was there, theres so much toxic stuff, so just to move through it as cleanly as I could, I just had to tune it all out. Sitting in it, facing it, you move through it faster." Which is why she wont read what is written about her, but is more than happy to still lash out at the tabloid industry that she admits gives the rest of the media a bad reputation. "Theyre horrendous and just so reckless. If I drive really slowly and watch whats happening behind me, these men are driving on sidewalks, and cutting through intersections. Now theres this whole new photo agency thats been started. That is basically hiring retired gangsters who just need to shoot a picture. They dont have to have any photography school, as long as just have to know how to be aggressive, scare the shit out of people and get the picture."

As tumultuous a year this has been for Jennifer in her personal life, at least in her post-Friends world the actress has much to be smiling about. Starring opposite Kevin Costner, Shirley MacLaine and Mark Ruffalo in Rumour Has It, Aniston plays a young woman scared of commitment, fuelled by the fact that she may be the daughter of the man who inspired the Dustin Hoffman character in The Graduate, with whom she ultimately has an affair. Her first film following the cessation of Friends, Anistons attraction to the film was that "It was fun and light. Being my first job after Friends, I felt it was a nice little delicate step out of the nest. It wasnt that complicated and I also really thought, as far as these romantic comedies, go, this was interesting; to have The Graduate as a backdrop, as opposed to the formulaic girl gets guy, fakes it to the fiancée to fool the guy that she really wants and then she really doesnt get him. Not that there is anything wrong with it, but theres just so many ways you can tell a story. People get lazy and I thought Ted [Griffin] did a really good job."

Aniston says that there were aspects of this character she could relate to. "I think Sarah is a little more self-indulgent than I am. I love my family but I still wonder if theyre mine. I dont have as much fear that is my family but I also just figured it out a little earlier than she did and I guess she has a little arrested development."

Yet she does not necessarily identify with Sarahs insecurities, admitting that despite her fame and success, those insecurities in her own life remain prevalent. "I dont think success has anything to do with making me secure with my life. I think my personal, emotional experiences give me the ability to be more secure with who I am, but as for success, Ive just been very blessed." As for the films dealing with a younger woman and a much older man, the actress laughingly shrieks that she knows from prior experience, it cant work. "That never pans out, because I think eventually you grow up. When I was 21 I dated an older man, about 18 years older, and it was stupid. It was fun for a minute then it became like can I get you some tea or a crutch?"

While Friends has been over now for over a year, Aniston remains emotional about not having the sanctity of that set to work on. "When I was making Rumour Has It, I was two stages over and got to visit the set, which was pathetic. When August rolled around and normally, I was ready to go back to Friends, I sat there for about a day and went, well, this is awkward but it just happens. It was so ready to be done and everybody was ready to let go." Yet Jennifer remains close to the cast she left behind. "I see Courtney every week, being the godmother of her little baby girl and I last week saw Matty Perry and Matty LeBlanc. Its not an effort to keep up with them, we just do it."

Aniston will next be seen in the new Indie film, Friends with Money, which is set to open next months Sundance Film Festival. "Theres a group of five women, Catherine Keener, Fran McDormand, Joan Cusack and myself and Im the youngest of the group. Everybodys sort of married, evolved in their lives and Im pretty much the drifter, the lost little sheep who is a maid. I have a little bit of a pot smoking issue, Im a little unmotivated, my friends all have money and I dont so its about how we deal with relationships and how money effects friendships. Its sweet and I think Nicole Holofcener is such a good writer, who captures the human spirit so well on the simplest level." Aniston says she is equally looking forward to her second visit to Sundance. "If youre happy with the movie you did then its great, plus you get to ski a little bit and wear snow boots." Happy to alternate between the Indie and mainstream, Aniston says she tries to be selective about the films she choses without over-thinking the choices she makes. "I just go by my gut, rather than strategize and say well, Ive done this. Now I have to do one of these next. If its good and I think I can do it well, then Ill do it."

It appears as if that pragmatic philosophy holds the actress in god stead, as long as she doesnt have to act as some form of role model for young women, she finally insists. "I dont ever see myself as a role model, or poster child for anything. Were all just doing the best we can."

SYNOPSIS
A young woman (Jennifer Aniston) discovers that Charles Webb's novel (and Mike Nichols's film) THE GRADUATE may be based on a tryst between her grandmother and a Benjamin Braddock-type whom she meets later in his life.