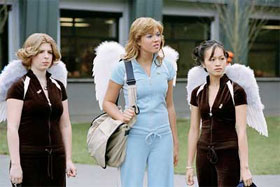 Jena Malone is not your typical 19-year old. There is nothing remotely Hollywood about this actress who punctuates her sentences with man, and loosely reclines on her hotel room sofa nearing the end of a days publicity for her latest film Saved. And even then, she retains an upbeat energy. "I love talking about movies that mean something to me," Malone says. Saved is one of those films, in which the actress stars as 'Good girl' Mary, who, with her popular, influential best friend, Hilary Faye (Mandy Moore), are starting their senior year at the top of the social structure at American Christian High School. But when Mary finds out shes pregnant, Hilary Faye and her devoted 'disciples' turn against Mary and the school labels her an outcast. Its as an outsider, however, that Mary finds true friends - other students the school doesnt quite know what to do with.

Saved is a darkly satiric portrait of parochial high school life, religious obsession and rebellion, but it is its exploration of religious education that may get some tongues wagging. But Malone doesnt seem concerned by any likely controversy. "From our point of view, having screened the film for a vast majority of religious groups, the response has been overwhelmingly positive. I think these young boys and girls, who are going to these religious schools, are happy to see a film about them. Thats being portrayed accurately. If we could all just laugh at ourselves, in hard times or good times, it would be an incredible world. But sometimes that s not the easiest thing." Malone was aware that shooting the film on location in some established Christian schools was problematic for the producers, but argues that "People who havent seen the film are more weary and vying controversy, than the ones whove actually seen it and know that this film is very much pro-Christian and has a pro-faith message to talk about. Its those basic teachings of Jesus Christ, which are love and acceptance in many forms," Malone says.

Like her co-star Macaulay Culkin, Malone has grown up on the screen, but unlike her famous co-star, she was able to survive the experience and continue to become older, gracefully. She skirts the subject of Culkin directly, denying that the pair discussed the lessons each derived from growing up on camera, merely saying "that were both very supportive of each other and we talked about a whole range of things." There remains, with Malone, an uncanny intellect, a desire to be taken seriously as an actress and not stumble into a Hollywood trap. Jena says that this sense of maturity that is in inherent in her, comes from her insistence that not live anywhere near Hollywood. "I have a wonderful house in Lake Tahoe, a supportive family and a boyfriend I love, all of which keeps me real."

What else keeps it real is her career choices, choosing to pick challenging roles in often tough, Indie films from Bastard out of Carolina, to Johnny Darko and The Dangerous Lives of Altar Boys. "A lot of it comes from making those choices and seeking out these types of films. I tell my agent that I want to read everything. I want to read everything from Mean Girls to short films that are coming in. Just to see what different type of roles young people are being offered or written about these days. For me its about truth, it sounds really gross and cheesy, but if its an honest depiction of youth then Im stoked about it. Im very excited about trying to work on it, get the film made, or be a part of it to some degree."

Asked what kinds of obstacles face todays teenagers, Malone pauses. "Its an individual thing. Your mountains are my molehills. I feel like a lot of the drama we deal with in high school, in those environments, is self-created. Were dealing with drama and how it affects people. How it brings people together and pulls them apart. For me, looking back, the hardest times in my high school was all bullshit. I was completely traumatized by that. It was nothing. I could have easily thought about it from a different perspective and it would have been a perfectly healthy situation. I think we have more of a limited perspective when were young. Were not given the opportunity to search out different types of experiences. If all were seeing is this high school environment, then its detrimental to our mental health. It has nothing to do with reality, I think."