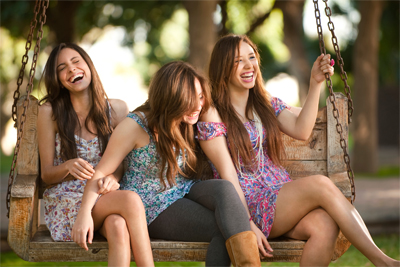 Invisalign Australia, pioneers of the invisible-orthodontics market is fast becoming a favourite amongst well known Australian personalities as the way to achieve a straighter, more beautiful looking smile.

Channel 7 television star Hannah Marshall, is the latest to join a growing list of celebrities who are committed to improving their natural smile. Sports stars Leisel Jones and Torah Bright have undergone treatment, while Bondi local Lifeguard Anthony Carroll ('Harries') became an official ambassador for Invisalign Australia when he started his treatment in July of this year.

"I had always wanted to straighten my teeth as I didn't have braces as a teenager like most of my peers. But because I work in front of the camera braces simply weren't an option. It seemed impossible to find a break in my schedule where I would have the time to straighten them," says Hannah.

When I heard about Invisalign I couldn't believe how perfect it was. It means I can keep working AND get the teeth I have always wanted. I can already see the difference in my smile and am really excited to see the finished results," she added.

Developed with orthodontists and used in dental practices around the world, Invisalign is the fastest growing orthodontic company in Australia, recognised worldwide for its modern approach to straightening teeth via a series of clear, removable, custom made aligners.

Over 1.5 million patients have been treated with Invisalign, including a host of International celebrities. Invisalign boasts a 96 per cent patient satisfaction rating and recent developments have expanded the clinical scope of Invisalign treatment, meaning the Invisalign system can now be used to treat even complex orthodontic issues; from overly crowded teeth and underbites, to jaw problems and tooth alignment issues.

Invisalign® was launched in Australia in February 2002 and there are already over 1,000 orthodontists and dentists accredited and trained to use Invisalign in Australia and New Zealand.

Invisalign Australia Pty Ltd is the exclusive distributor for Invisalign® in Australia and New Zealand. Developed with orthodontists and used in dental practices around the world, Invisalign is the fastest growing orthodontic company in Australia, recognised worldwide for its modern approach to straightening teeth. Invisalign uses a series of clear, nearly invisible, removable appliances that gently move teeth to a desired final position. Because it does not rely on the use of metal or ceramic brackets and wires, Invisalign significantly reduces the aesthetic and other limitations associated with braces. Invisalign is appropriate for treating adults and teens. Sold in more than 50 countries worldwide, Invisalign is a well-established brand name among consumers and has helped doctors achieve healthy, beautiful smiles for over 1.5 million patients worldwide.