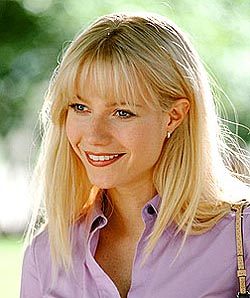 She's an Oscar winner and an American icon, and based on her latest film, will do anything for her art. In the Farrelly Brothers' sweet comedy Shallow Hal, Gwyneth Paltrow plays an obese woman - at least to everyone except a hypnotized Jack Black, and had to spend some time in heavy make up and a fat suit.

Not the Gwyneth we may know and love, but as she reveals, shooting this film was a learning experience in itself.

Gwyneth Paltrow admits to having a sense of humour. Not only about herself, but life in general.

Still a fetching 29, despite an apparent longevity, the Oscar-winning Shakespeare in Love star, rediscovered her own irreverence after having agreed to star as an obese young woman in the new Farrelly Brothers comedy Shallow Hal. "I laugh really hard at jokes," Paltrow smilingly explains. "[The Farrelly Brothers] say and do incredibly irreverent things. I mean, they just really are funny I mean REALLY funny. Out there, but funny."

What is particularly unique about Paltrow's latest role in Shallow Hal, is that she takes a step outside of an image that has been perpetuated by herself and the media, since launching into movie stardom in the mid-nineties. She plays an obese young woman whose inner beauty is what the central character of 'shallow' Hal sees. What others see is Paltrow in a fat suit.

To prepare for that physically challenging facet of her character, Paltrow recalls watching people who were overweight and practising. "My stand-in Ivy was also great because she let me ask her questions and I watched how she moved, as well as studied her kind of attitude." But more importantly, dressing up in the all-too-realistic fat suit, only made the actress aware of how perceptions towards her changed, as she transformed herself into her overweight counterpart. "It was very different. You know, when I was on set, I felt no kind of sexual energy from men, you know. Because normally, I would still have all of these tiny little clothes on the whole time, and then to come on set the other way with the suit on and felt almost lonely." 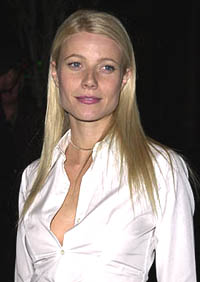 Paltrow recalls practising walking around with the suit on "just so that I would have a sense of it and what it felt like". Looking at herself in the mirror as the obese Rosemary filled her with varied emotions, she adds. "It was very strange the first time I put it on; I laughed, I cried and it was very intense." Paltrow recalls "going down in the lobby of the hotel where I tried it on, and people wouldn't even look at me; they wouldn't even make eye contact with me at all. It was really awful."

The reality of that character merely enhanced the actress's own insecurities. After all, she is constantly facing real-life media criticism of her own physicality. There ARE things that I feel insecure about, and people pick me about, and say 'Oh, she's gaining weight', and this and that, and press, or whatever. Now apparently I'm fat according to the New York Post," so Paltrow understands what it feels like not to like aspects of yourself, she insists.

Paltrow is unconcerned that certain sectors of society will be offended by Shallow Hal, insisting that it is not pro-thin. "I can understand sort of taking offence at a concept or in fear that maybe it will be offensive. But I don't think it's offensive at all. I think the message is very pro-overweight people, and very pro-inner beauty."

Shallow Hal has been criticised for adopting the perennial thin-is-beautiful stance, but Paltrow was drawn to the beauty is in the eyes of the beholder or beauty is skin deep themes of the movie, and relates in some ways, to her character's almost tragic predicament in this film. "I really like that part in the movie where [real-life motivational speaker] Tony Robbins says that we're all hypnotized to see beauty in this one specific way, and it's true. I don't know who decided that skinny was more appealing than not skinny it just seems arbitrary. If we were living in ancient Rome or Greece, I would be considered sickly and unattractive, and it's just like the times dictate that thin is better for some strange reason, which I think is foolish."

Yet Paltrow also agrees that the industry in which she finds herself has probably reinforced some of those stereotypes.
"Absolutely, and so what I love about this movie is that Jack [Black], isn't technically your basic leading man. I mean, he doesn't look like Tom Cruise, and yet he's the star of the movie."

As shallowness goes, Paltrow talks half-jokingly about the superficiality of the male species, something that she further identifies with. "To be honest, I think that most men are shallow, and most men tend to be, which I think it's a Darwinian thing, but we won't get all into that." But she DOES insist that "men assume and think that if they produce offspring from all of these attractive people, their offspring will be attractive therefore insuring the propagation of their DNA, and that's the whole point." 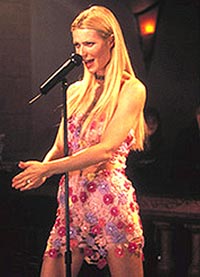 Paltrow has been in the top of her career since scoring roles in 1995's Seven, Jefferson in Paris and Moonlight and Valentino. Her star continued to rise in the diverse likes of Emma, Great Expectations and her critically lauded work in Sliding Doors. She won an Oscar for 1998's Shakespeare in Love, and remains one of the most recognisable faces in Hollywood. But in the years that I've spoken to Gwyneth, one thing remains constant: Her refusal to play the part of celebrity. "I have a very highly developed sense of denial, and I'm very good at it. So I never recognize the fact that I'm famous or take it to account unless I have to. But I really don't believe it, I don't read anything about myself, and I try to keep it completely separate." Yet Paltrow, who after al was once the bride-to-be of one Brad Pitt, denies her own shallowness. "I wanted to fall in love with someone who wasn't attractive at all by other people's standards, so. I have dated some very attractive men, but they were really nice people, too. They were really good people."

Professionally, Paltrow thrives on challenging herself. Following the release of the comparatively mainstream Shallow Hal, the actress will be seen in the ensemble dark comedy/drama, The Royal Tenenbaums, co-starring the eclectic likes of Gene Hackman, Owen Wilson and Ben Stiller. "I play Margo Tenenbaum she's the middle child, she's adopted, she's the only girl, she's a playwright, and she and her siblings all failed in life. They think it is because their father is kind of mean and not present and leaves. So when they grow up, they were kind of incapable of sustaining their lives or livelihoods for one reason or another, so they all end up moving back in with their mother, Angelica Houston, in order to try and heal. It's really good."

Paltrow continues to challenge herself. "I get challenged by things, not knowing what they are going to be. I read something and think this will be interesting or challenging or something I haven't done, and it will be something I haven't thought of to do. I'm just very open to whatever comes, and in doing different types of projects. It's better to keep learning and working as I feel like there's a lot I haven't done yet."