Georgia State Line Older Than I Am 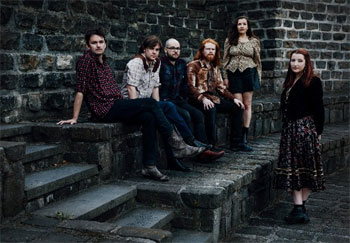 Georgia State Line Older Than I Am

Hailing from Regional Victoria but dreaming of Central Tennessee comes Melbourne's own Georgia State Line with brand new single -Older Than I Am.' Praised as one of Australia's best up-and-coming Country/Americana acts, the seasoned six-piece of ole twang-loving musicians, lead by Georgia Delves reveal -Older Than I Am' and announce a launch show in Melbourne at Brunswick's The Union Hotel next month.

-Older Than I Am' channels the authentic land-lovin', heat-bearing sound of classic Americana, and blends it with folk melodies and alt-country rhythms, with the homely story telling of growing up and being misunderstood. An ode to the innocence of youth, but being an older soul, the track is riddled with jangly guitar hooks, and beckoning vocal harmonies, that sit atop a train-rattling drum beat reminiscent of long, state-crossing Aussie road trips.

STREAM 'OLDER THAN I AM' HERE

'These days I seem to usually be the youngest person in most settings I find myself in, and sometimes when you are younger people can misjudge or undermine what you're about- within the music industry and beyond. -Older Than I Am' is a song written out of the tiresome exercise that becomes when you are tied to a preconceived idea of your age bracket." – Georgia Delves

Off the back of performing at Australia's National Folk Festival in Canberra last month, as well as wooing crowds at the 2017 Terang Country Music Festival, Georgia State Line will play an intimate home-crowd show to launch the single at Melbourne's the Union Hotel on Saturday 17 June.

"Many Australian artists refer to themselves as Americana or Alt-Country these days, but very few deliver the real thing as well as Georgia State Line. Hailing from Melbourne but sounding like Texas or Tennessee, this band represents the true essence of today's country music." - Bill Chambers