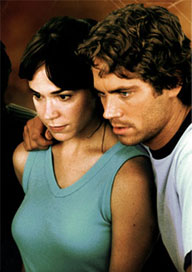 It would be an understatement to define Australia's Frances O'Connor as shy. Clearly uncomfortable at the whole press junket process, which she sees as a necessary evil to help promote the latest Hollywood film, the pretty 34-year old smiles appropriately, believing in a be brief attitude. Perhaps that is why it is difficult to associate the actress, who most recently won acclaim for her role in London's West End playing Maggie in Cat on a Hot Tin Roof, as Paul Walker's love interest in the time travel adventure Timeline. "I just finished Cat on a Hot Tin Roof, and this kind of got offered to me right after that," explains O'Connor in a Los Angeles hotel room. "I've never done anything like that before, and I thought if I'm gonna do that kind of thing, then [director] Dick Donner is very good at that kind of genre, so it's kind of a combination of those few things." In Timeline, the actress plays a diligent archaeologist who goes back to the Middle Ages in order to rescue her lead archaeologist and expert on the Hundred Years War, played by Billy Connolly. O'Connor may not have done such a big Hollywood adventure had it not been for the kind of woman she played. "I liked that she's kind of very assertive and wasn't a wimp, but very active in the piece I think the women in Donner's films are very assertive."

O'Connor also loved the idea of going from what she calls an "acting fit"experience in Cat on a Hot Tin Roof to spending several months in Montreal filming Timeline. "which is just a lot of fun. I mean, you're working so hard and I thought it would be nice to just have fun," says O'Connor, who turned down the chance to bring her Maggie to Broadway. "I just ran out of steam. We'd done it for four months and that's a long time, especially if you've got a career in film, to kind of be out of the loop, and I was going to have to do another four months, which is what the commitment was. So I felt I needed to get back and I also felt I'd done the play. You know, I got to the end of the journey for that character, and I didn't have the steam to go on for another 4 months." Of course, O'Connor still hopes to make her Broadway debut in the foreseeable future. "I'd really love to do Streetcar Named Desire, which hasn't been done for a while on Broadway."O'Connor says that in an ideal world, if she had the luxury to truly pick and choose theatre and film, "I'd probably mix it up a lot, doing a lot of film and theatre, but I think film is the kind of thing that you have to kind of keep coming back to."

The Perth-born actress, whose success was initiated in the hit comedy Love and other Catastrophes, went on to acclaim in the likes of Kiss or Kill, Thank God He Met Lizzie, and Mansfield Park, before her Hollywood bow in Bedazzled. She won rave reviews for her poignant work in Spielberg's critically divided A.I, a film that remembers with much fondness. "Well I think it was interesting at the time, because it got quite a bit of negative press and some negative reaction from people. But I think in 10 years it'll be a classic. . I think it's a difficult film but I think it has moments that are brilliant."

O'Connor calls London home these days, where she lives with her Scottish boyfriend, but won't elaborate on any aspect of her private life, and never has. She hasn't worked in an Australian film since 1998's A Little Bit of Soul, and denies turning her back on the Australian industry. "I just haven't found anything that I really wanted to do, you know? I got offered a couple of parts, but there was nothing that I could really kind of sink my teeth into, but a couple of things have come up for next year, so hopefully one of those will pan out." O'Connor will be spending Christmas in Australia Tasmania to be precise, in order to attend her sister's wedding, but keeps busy with a variety of different film projects, including Iron Jawed Ladies. "It's a story, not many people know about these two women who got the vote for women in America. It's set in the 1900's to about the 20s. It's afantastic story."

O'Connor joins that elite group of Australian women who have managed to carve strong international film careers, and doesn't quite know why Australians are doing so well internationally. "I think we've got a similar kind of simpatico to Americans, so there must be some connection there, but it's got a slightly different kind of twist on it though. I don't know what it is. I think there's a kind of honesty that comes through Australian acting maybe which Americans have that too." Yet at the same time, unlike perhaps Blanchett and Kidman, O'Connor prefers to be actress, not star. "I do much prefer being an actor rather than going through the whole celebrity thing. I think going that way can take the focus off your acting which I think that can be a bit dangerous."