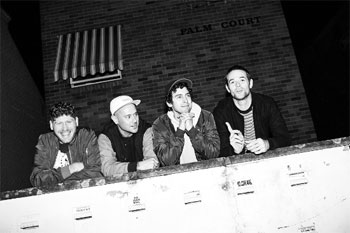 Currently on tour supporting Tired Lion, Sydney's garage punk outfit Food Court today announce a headline run around the country for November. The band kicked off 2017 with performances at SxSW which landed them in DIY Magazine's 'Best Things We Saw At SxSW" list. See what all the fuss is about when Food Court hit the road in support of forthcoming album, Good Luck, slated for release on September 22nd on Dine Alone Records.

Latest single -I've Been Wrong' taps into the lyrical themes of the album: mistakes, loss and learning and was recently added to Fbi.

Food Court's long-awaited debut long-player Good Luck was recorded with the esteemed John Castle at the legendary Shed Studios (You Am I, Vance Joy, The Bamboos, Jack River). The 11 tracks were recorded in a week and the result is a classic debut, a scrapbook of stories delivered through melody-driven garage punk.

The tour kicks off in November taking in Sydney, Wollongong, Melbourne, Byron Bay and Newcastle, tickets on sale now.