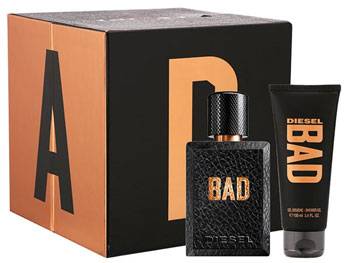 He's cool. He's bad.
He's a black leather-clad magnet, attracting anything and anyone that comes his way.
You can look but don't touch. He's a wildfire. He burns.

He does what he wants when he wants, making up his own rules along the way.
He lives in the moment, he lives fast.
He's overconfident and unpredictable.
Disarmingly sincere, he's no one but himself.
What you see is what you get.

He's the guy that won't always return your calls.
He's a rush of adrenaline. Fasten your seatbelt before you fall for him.
He drives fast. He drives a girl crazy.
He feels so good… because he's bad.
Now you know.

Covered in what seems like grainy black leather, the Diesel BAD bottle comes with seductive, masculine looks, hinting at the classic black leather biker jacket.*
Introducing a technical breakthrough, the leather-like texture is in fact micro-engraved glass. It's the result of an innovative engraving and printing technique developed by master craftsmen from renowned Pochet du Courval.

Although at first sight the bottle seems impenetrable, the transparent BAD logo allows a look inside. Its blazing copper interior gives the impression that the bottle is burning from the inside.

Refined and masculine, the capsule's metallic mesh pattern brings to mind a Ducati.
The Diesel Bad bottle is a real luxury object.

With its oversized logo, the outer box reinforces the fragrance's bad guy symbolism.

A daring and sophisticated olfactive signature, Diesel BAD is the first scent combining accords of tobacco and caviar to create an addictive, pulsating, yet fresh woodiness.

The game of seduction starts with an exciting rush of citrus notes and cold spices. Revived by cardamom and lavender, bergamot bites you by surprise…
Then, like a trickle of sweat on a man's chiseled body, the saltiness of caviar notes adds an addictive sense of eroticism. Provocative. Salivating.

Rough and masculine, tobacco and iris roots turn up the heat. These intoxicating notes finally make you lose control.

This new scent explores a fresh salty territory in the woody family. Created by Anne Flipo and Carlos Benaim from IFF, it reinforces Diesel's strong identity using a contrast between the innovative accord of caviar lying on the warm facets of tobacco. The face of Diesel BAD, actor Boyd Holbrook grew up in Prestonsburg, Kentucky.
He was discovered by a model scout in a local theater and moved to New York where he auditioned for modeling jobs, wrote poetry, took up sculpting, and studied film at N.Y.U. and Colombia.

Set to star as the chief villain in the next Wolverine installment, Boyd Holbrook is quickly amassing an impressive resumé of diverse roles, starring amongst some of the most well-respected actors in Hollywood.

He currently stars in the Netflix series Narcos, and was recently seen in The Free World opposite Elisabeth Moss, which premiered at this year's Sundance Film Festival. Other recent film work includes A Walk Among The Tombstones, opposite Liam Neeson, Terrence Malick's Weightless, opposite Ryan Gosling, Christian Bale, Michael Fassbender, Rooney Mara and Natalie Portman, and the comedy Skeleton Twins, with Kristin Wiig and Luke Wilson.

On television, Holbrook starred in Steven Soderbergh's Liberace biopic Behind The Candelabra, opposite Michael Douglas and Matt Damon, in which he plays Liberace's love interest when his longtime lover falls out of favor.

In other artistic endeavors, Holbrook is an avid sculptor. His work has been exhibited at various locations, including the Rare Gallery in New York. Boyd Holbrook is a free spirit who has always followed his own rules. He is the perfect incarnation of the Diesel BAD fragrance.

Starring American actor Boyd Holbrook, the Diesel BAD movie was directed by Andrew Dominik, the New Zealand born Australian director of Killing Them Softly and The Assassination of Jesse James by the Coward Robert Ford.

In the Diesel BAD movie, Boyd Holbrook plays an incorrigible seducer. This irresistible, leather-clad smart rebel is about to kiss a girl. Right before going for the kiss he tells her what to expect from him, being disarmingly sincere:

In a series of quick flashbacks, our rebel hero is then shown speeding a fast car, racing a motorcycle into the sunset, and attending a rowdy boxing match " scenes of a free and turbulent lifestyle.

The movie ends in the here and now, with the girl giving in to our hero's charms. They kiss passionately.
As so often, in Hollywood and beyond, the bad boy gets the girl.

The print ads feature close-up portraits of Boyd Holbrook wearing a black leather jacket along with the campaign's ironic taglines including I will be no angel my angel. The campaign's cool, detached tone reprises the film's sense of irony.