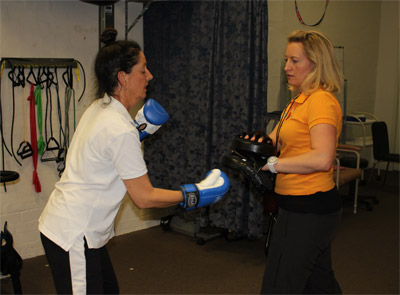 An Australian treatment approach that uses intensive exercise to 'retrain the brain' of people with Parkinson's disease may be able to modify progression of the debilitating disease in up to 80,000 Australian sufferers.

Described as a "game changer" in how Parkinson's disease is treated, the combination of challenging physical exercise and mental activity has been shown to improve mobility and confidence levels in people with the degenerative movement disorder.

Known as PD Warrior, the Parkinson's disease clinic in Sydney's north is modelled on recent scientific evidence that supports the introduction of specialist rehabilitation exercises from the time of diagnosis.

"Exercise is front line defence for people with Parkinson's disease. The PD Warrior program aims to retrain the brain to allow everyday movements and activities to be performed with greater ease," said Melissa McConaghy, founder of PD Warrior and specialist neurological physiotherapist at Advance Rehab Centre.

Commenting on the first four months of the PD Warrior program, Mrs McConaghy said, "The initial results have been very impressive. We are now planning a study to assess the effectiveness of PD Warrior on the mobility and quality-of-life of people with Parkinson's disease. We also plan to launch a national training program for other physiotherapists in the New Year."

People outside of Sydney can look forward to the benefits of PD Warrior through accredited regional physiotherapists in the New Year.

"We know that periods of inactivity in people with Parkinson's disease can lead to further and faster deterioration of the brain's function. The right kind of exercise can improve the functioning of brain pathways not already destroyed by the disease," Mrs McConaghy said.

Until recently, management of Parkinson's disease primarily relied on the use of medication and the introduction of movement strategies and falls prevention techniques only in the later stages of the disease when balance and walking became problematic.

"Medication has an important role to play in reducing the symptoms. Specialised exercise techniques combining physical and mental activity can also deliver long-term benefits. I have seen this in many of the patients referred to this program," said Dr Stephen Tisch, neurologist at St Vincent's Hospital.

Parkinson's disease is a progressive neurodegenerative disease which affects the part of the brain responsible for initiating and coordinating movement. Over time symptoms worsen, leading to severe disability caused by tremor and muscle stiffness, slow movement and impaired balance. This can impact on everyday tasks such as walking, talking, swallowing and fine motor skills such as writing and doing up buttons.

Cindy Summers, a regular PD Warrior participant, explained that the program can be confronting. "It is often only when people start the classes that they realise what the disease has robbed them of," she said.

A growing number of people with Parkinson's disease travel across Sydney and as far as the Central Coast to benefit from the unique PD Warrior circuit classes.

"The people that attend the program have varying degrees of symptoms, but one thing they have in common is their determination to improve their quality-of-life," explained Lynn Tullock, co-founder of PD Warrior and neurological physiotherapist at Advance Rehab Centre.

Based in St Leonards, Sydney, Advanced Rehab Centre is a specialist neurological rehabilitation service dedicated to improving the lives of people with neurological and complex care needs. The experienced team provides a comprehensive outpatient rehab service including physiotherapy, occupational therapy, hydrotherapy, clinical psychology and speech pathology.
No doctor referral is required for PD Warrior however everyone is required to have a full neurological assessment and program prescription prior to entering the circuit class. 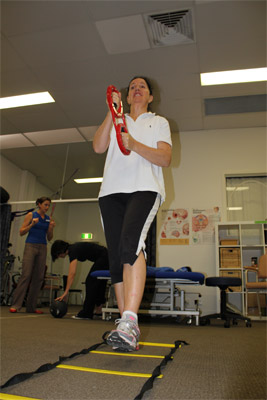 Question: When were you first diagnosed with Parkinson's disease?

Cindy Summers: I was diagnosed with Parkinson's disease 8 years ago. I was lying on the couch with my youngest son and he asked me why my leg kept moving and I hadn't really noticed before although that was the first sign. After that I noticed I was having difficulties with my handwriting as it was getting smaller and smaller and I was having trouble brushing my teeth in a circular motion. I then decided to go to the doctor.


Question: Can you talk about how you felt at the time?

Cindy Summers: To be honest I never dreamt the diagnoses would be Parkinson's disease, I assumed it was a lack of magnesium. When I went to my doctor he suggested I go to a neurologist and when I was at the neurologist he lent over the table, with a box of tissues and said "you have Parkinson's disease". I was absolutely in denial thinking 'how bizarre, why would he be saying that?'


Question: How does Parkinson's disease affect you on a daily basis?

Cindy Summers: I try not to let it affect me too much but I am very conscious of my symptoms and I do things when I am most mobile. If I am preparing a meal I need to think about when I will prepare that and I have to plan going out and organising to catch a bus.


Question: What treatment do you use for Parkinson's disease?

Cindy Summers: I take three different medications including Mucuna which is a more natural product and participate in the PD Warrior program.


Question: What inspired you to try PD Warrior as a treatment?

Cindy Summers: A friend of mine was going to the clinic and she said she was getting great benefits from the PD Warrior program and I decided to trial it and I love it!


Question: What did you do at PD Warrior?

Cindy Summers: I take my husband with me to the PD Warrior program because you can take a buddy and it's something we can do together physically which is really lovely because he is able bodied and plays Squash and other wondrous things. The class is very much exaggerated movement physically so that everyday movement because easier. In addition to that they do mental tasks as well which means you may be doing something very strenuous whilst counting backwards from 100 in multiples of seven; PD Warrior isn't for the faint hearted!


Question: How did you feel when you first begun the PD Warrior program?

Cindy Summers: When I first began the program I started to realise all the things I had been missing out on including things I hadn't even noticed. I was able to achieve simple things that women do such as putting on makeup as I had previously stopped wearing it and I had also previously avoided wearing tights; a whole wardrobe has now reappeared as PD Warrior made those things possible again.


Question: How often do you participate in the PD Warrior program?

Cindy Summers: I attend the PD Warrior program twice a week and it is local for me but when I was there on Saturday participants had travelled from Newcastle to attend. Participants travel wide and far because there is nothing like the program, elsewhere, in Australia. I wouldn't miss the program even though I exercise at home as well. When you attend a PD Warrior circuit class everyone motivates each other a bit more and the physiotherapist really pushes you whereas at home you go at your own jolly pace!


Question: What advice do you have for someone who may have recently been diagnosed with Parkinson's disease?

Cindy Summers: I'd suggest not waiting and starting the PD Warrior program as soon as they can because a lot of people believe it is okay because they are still going to the gym and they don't need to do anymore but the earlier you can start rewiring your brain, the better.

I believe I am rewiring my brain, naturally, via the neurological exercises rather than through surgery. I am maintaining my medication and I haven't changed my medication in two years, the drugs cause the involuntary movements not the diseases and as long as I can keep my medicine to a minimum I can have more control. I was at the Neurologist recently and he told me how much I had improved which never happens with a degenerative disease as they often get worse and worse and worse. My walking, my confidence and every aspect of my life has improved which is exciting.