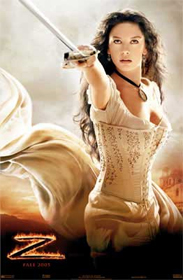 Zeta-Jones Relishes Return to the Familiar.

Catherine Zeta Jones captivated audiences and shot to stardom via her role as Elena in the 1998 take on the Zorro legend, MASK OF ZORRO. This sequel, set in 1850, finds her married to Alejandro, aka Zorro (Antonio Banderas, also returning to reprise his character from MASK OF ZORRO), and demanding he stop all the derring-do and spend time with their smart-as-a-whip 10-year-old son, Joaquin (Adrian Alonso). The boy has some serious acrobatic skills, but is unaware of his father's secret identity. He can only look askance as his parents separate and Dad starts spending too much time with his hard-drinking horse, while Mom lets herself be wooed by the odious Count Armand (Rufus Sewell). It's up to little Zorro Joaquin to get to the bottom of things and get his folk-hero parents back into action.

Catherine Zeta-Jones is a stunning sight in her elaborate lace-and-linen ensembles, and there's some complex DA VINCI CODE-style secret society skullduggery, but otherwise this sequel has more in common with classic old Walt Disney comedies like THE APPLE DUMPLING GANG or Robert Rodiguez's SPY KIDS than with the 1998 movie. The swordfighting and death-defying action sequences are all totally bloodless, and director Martin Campbell--who also helmed the '98 film--keeps the dialogue very contemporary and child-friendly throughout.

Interview:
Catherine Zeta-Jones enters a room and one is fully aware one is in the presence of that rare Hollywood being: a bona fide movie star who truly exudes elegance. Wearing a striking outfit by designer Narciso Rodriguez, in a simple, elegant, black dress with white trim, and diamond choker, Zeta-Jones laughs playfully with the press and maintaining an openness rare for a star of her magnitude. .Yet the actress and husband Michael Douglas have been clever avoiding an intrusive press and paparazzi. "That's one of the great things about living in Bermuda. It's just easy and just removed. It's just a great place to bring up kids." In fact, she adds, Los Angeles has become primarily a place of work, though she tends to shoo films on location, films such as the new Zorro. Its been almost a decade since a relatively unknown Catherine Zeta-Jones lit up the screen in the first Zorro, and she knew the time was right for her to do it again at this juncture of her career. "I used to bump into Antonio and Martin Campbell, and we began with this conversation: Let's do another one. Come on. It's so much fun." "For me it was not just professionally important but personally important. Michael saw me in the first one and - seduced me," she recalls, laughingly. "He hounded me and followed me around the world until he found me. Now look at me now, two kids later, I can't even believe it's been 9 years since we did the first one. So we had a few drafts that were sent that were just not right, and all the elements had to be in place, because we didn't want to do a sequel unless we were going to do one that was as good as or could surpass the original."

In the sequel, despite trying to keep his swashbuckling to a minimum, a threat to California's pending statehood causes the adventure-loving Alejandro de la Vega, aka Zorro, (Antonio Banderas) -- and his wife, Elena (Zeta-Jones) -- to take action., all of which is complicated with their nine year old son, Joaquin [played by Mexican newcomer Adrian Alonso]. The actress laughs when asked if she had to curtail her maternal instincts when working with a young child. "I'm so glad he probably couldn't understand what I was saying, so I would have really annoyed him, with: Why don't you tie your shoelaces? Why don't you tuck your shirt in? Be careful up there, Adrian." But it was Catherine Zeta-Jones who had to be careful shooting this physically demanding film. Not even her extensive theatre training could have prepared her for what lay ahead in Zorro. "I had very little time between finishing Oceans 12 and going down to Mexico. Theyd been shooting for a few weeks before, and I was really kind of nervous because I remembered on the first one we'd had three weeks of Zorro boot camp. Every day we were practicing, and I thought - oh my god, imagine if my sword fight is in the second week of shooting. At that point, I didn't know the schedule, so it kind of came back. It really did. I treated it like choreography and dancing - and a one and a two and a three and a four and a five and turn and down and up, so its a great exercise. After the first one I had great expectations of continuing this and maybe being an Olympian sword woman, but course, lazy old me," she adds, laughingly.

When it comes to her own self-analysis, the consistent trait in Catherine Zeta-Jones is her self-deprecating sense of humour. Not one to take herself too seriously, she readily admits her flaws and insecurities. Ironically, the actress is set to play a chef in the upcoming Mostly Martha, but in real life, her own cooking skills are not quite as developed as those of that character. "Michael is afraid when I'm in the kitchen. That's what really terrifies him, because I am a terrible cook and I'm not allowed to go in the kitchen anymore. I did actually burn a pan. It wasn't on fire but it was smoking, and I got a little scared, and right next to the stove was a big old fire extinguisher. I'm going to be this chef in Mostly Martha, so when you see me at the next junket, I'm going to be giving you recipes and my tricks of the trade," she says, amidst peals of laughter.

But like any beautiful woman, Catherine Zeta-Jones insecurities exist within her own physicality. "You know what? I woke up this morning, I found this one little line, and I was depressed. I mean, come on: hair, makeup, all that stuff, I make the most of myself, but you should have seen me this morning." The actress more than happily concedes that she has crappy days where she wouldnt be recognised. "Are you out of your mind? Of course I do. You should see me taking my kids to school. I have a baseball cap on, but why am I hiding? After all, nobody's going to recognize me anyway and besides, I drive a Peugeot."

Glamorous movie star she may be, but Catherine Zeta-Jones consistently keeps her fairy tale life in perspective. Her marriage to Michael Douglas is as strong as ever, the secret of which is, she says, smilingly: "We just love each other." As to how the couple navigates their life in a tough Hollywood environment, the always down=to-earth actress remains philosophical on that subject. "Michael said that the fact that we're in a 25-year age difference is kind of fantastic. We're at different places in our lives, career-wise and all that stuff, we're not vying for the attention that maybe two actors together around the same age are kind of vying for, and we have two kids, and if I'm working, Michael is with me and the kids and if he's working I'm with him - it just works for us. It balances so its not — I love you honey, I'll see you in six months."

But would the actress trade her anonymity for what shes got? Catherine Zeta-Jones quietly pauses, reflecting on the question. "What do I do? Would I change it? No. Sometimes, it gets a little tedious, sure, but that's one of the cons in so many pros."