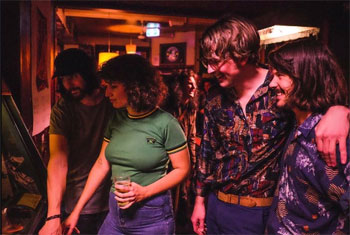 Doggo lovin' Melbourne musos Baby Blue are gearing up for a Sunday Funday residency every Sunday in October at Some Velvet Morning alongside a bunch of legendary local acts. Primetime pickings will see the band play five – yes five – Sunday shows across the month with entry by donation and all proceeds going to NFP herd2homes Dog Rescue. To coincide with the residency announce the band have also revealed a little glimpse into their Spaghetti Western alter egos in the new video for their dreamy single -Soccer Ball'.

Directed by Oliver Ramsay, the clip for -Soccer Ball' takes place at a Pascoe Vale petrol station where a standoff is underway. With each Baby Blue member cast within the video, the song's folk-like storytelling from lead vocalist Rhea Caldwell shine through, with jangly guitars and pop melodies courtesy of her seasoned band members Fabian Hunter, Nathanael Riley and Dave Mudie rounding out the track's playful, old-time feel.

'The entire clip was filmed in a day at a petrol station in Pascoe Vale. The owner of the petrol station was really lovely to us and all the customers dropping by were really curious what we were up to. We even had an actual police officer show up and have words to Fabian about covering up his police uniform until he had to be in shot. It was pretty funny." – Rhea Caldwell, Baby Blue

The Sunday Funday residency at Some Velvet Morning kicks off Sunday 1 October with rising Melbourne via Detroit and Germany favourite Hachiku and will showcase a huge spread of local talent including New Band, POPPONGENE, Truly Holy and Hollie Joyce. All donations upon entry will go to help rehome working breed dogs in death row pounds, shelters, private surrenders and farming properties through the incredible work of not-for-profit charity Herd2homes Dog Rescue.