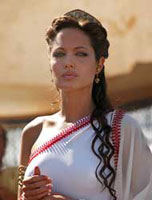 MOM'S THE WORD AS JOLIE HEADS TO BABYLON.

Unusually reserved but still an intoxicating presence, Oscar winner Angelina Jolie conceded that she was reticent to take on the complex role of Olympia, Alexander's power-hungry mother in the new Oliver Stone epic, because initially she didn't think she was up to the task of playing her. "Like most people, I couldn't understand the aspects of the mother, who she was, how that would work, and I didn't really know what the history meant and didn't really know her," Jolie said in a Los Angeles hotel room. "But I read it and really connected to her- I don't know what that says about me, "she adds laughingly.

Not one to do anything by halves, Jolie was required to spend some time handling real snakes for some vital scenes throughout the film, adding how important the snakes were in the context of her character and the times in which she lived. "The snakes are the essence of what certain things represent. She was a follower of the god Dionysus, aka Oliver Stone, god of chaos, but this was a time when women had no rights, were this vessel to have children and she was this first wife who had been locked away. So her son having power meant that they could live and he would succeed, so there was a lot about survival, therefore if I was at that time I think. I would be very similar."

Jolie has always emerged as a tough-minded individualist, but working with the intense Oliver Stone proved a challenge that the actress relished. "If you like to work hard, then you enjoy working with Oliver, but you just can't be relaxing or lazy in any way. You have to be so committed, and if you've got an idea for something, you've got to be able to back up why and fight for it and show him and I think you see it in the film. I think that everybody is just blood and guts out there and there's no hesitating, but we argued about things and he pushed me."

Jolie is reflective when asked to define Alexander as a film for today's contemporary audiences. "Since Oliver started this film so many years ago, as if the story took place so many years ago, there was no intention of any significance today, but clearly you can find significance if you take it apart and analyse it. To me the interesting thing in watching the film that I was most focused on - the man who says we're going to go to war being the one who was front and centre in the battle and the first to take the shots and bleed - I think is a different kind of leader and a different kind of way of approaching war. And I think it's interesting that Alexander is good and bad. There's no kind of total opinion about anything, saying this is how you should feel about this film. But I think the way he approaches, when he conquered Nara, he didn't change the culture and the religion, and he wouldn't allow his soldiers to rape women."

Jolie's Olympia is no easy character to define, but the actress says that she remains driven by her son, the true object of her ferocious ambition. "Some people say she's simply driven by power or, as she says, her fears. But I had come from a place that made the most sense to me that I also felt made her human. She genuinely loved her son and was like a tough father." While Jolie may not be as intensely ambitious as her character, she says that motherhood has shifted her priorities and doesn't necessarily work as hard as she once did. "I take a lot of time these days to travel and be at home with my son. The last three films I've done, I'm not leading in them, so I take a lot of time in between, but I just want to understand life, want to travel and want to be a better person and better mom. I just want to just do something good with my life." Including becoming as selective as she is in choosing film projects. "There aren't a lot of great things out there to do, and deciding not just to do things and try to make them. You do a film like this and you work with a great director and great words and great actors and you can feel at ease to just be a part of it."

Much continues to be written about Jolie, and the actress, smilingly, says she ignores most of it, "even if I hear there's a nice article, because I don't want that stuff in my sub-conscious. I love being an actress and work really hard when I've got a job, and I love a good film when I see it, but that stuff is not something that's important to me in life and not something I think about on a daily basis. It's not who I am, but I'm grateful I've had a career."