Home alone meals are top of the menu 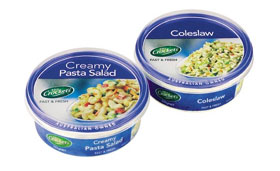 More than one quarter of meals consumed at home are eaten by one person and, due to the busy lives they lead, young singles are often surviving on takeaway or leftovers for their week night main meal, according to recent research commissioned by Unilever Australasia.

Highlighting a growing trend towards spending minimal time in the kitchen during the week, the research also found that among more than half of young singles and couples' week night meals included canned soup, frozen pizza, frozen pies and snack style products.

In response to this, Continental introduces Tortellini Meal for One, a tasty, simple to prepare and easy to clean up option for those nights when cooking a meal from scratch seems like too much effort.

Fiona Meagher, Continental Group Brand Manager said: "Often, single and busy people don't have the motivation to cook a meal for themselves and cooking is a pastime reserved for having dinner guests. This means they either feel unsatisfied with a snack, or supplement with takeaways, throughout the week. Continental Tortellini for One gives people who love food, but eat by themselves, the option of having a great tasting meal without the effort."

Continental Tortellini is a substantial meal for one which includes delicious cheese filled Italian tortellini served with a selection of tasty sauces such as Vine Ripened Tomato and Herb, Bacon Carbonara, Creamy Tomato Pesto, and Mushroom and Garlic. Simple to prepare in the microwave or on the stove, you only need to add milk and water for a terrific pasta meal for one.

Continental Tortellini Meal for One has been designed to be as simple or as involved as the individual likes, so those with a little culinary flare can experiment by adding additional ingredients such as fresh vegetables, olives or parmesan cheese.

Priced at $2.49 Continental Tortellini Meal for One is available at leading supermarkets.

Notes:
Independent research into Main Meal Occasions, commissioned by Unilever Australasia, surveyed males and females aged 18-64. According to this research: