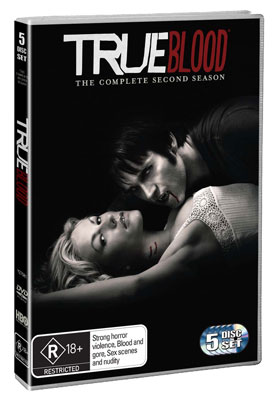 In the backwoods Louisiana town of Bon Temps, the mystery surrounding the serial killer has finally been solved. But just as things are settling down, deadly new twists threaten Sookie Stackhouse and everyone around her.

Mixing romance, suspense, mystery and humour, the show takes place in the not-too-distant future, when vampires have come out of the coffin, thanks to the invention of mass-produced synthetic blood that means they no longer need humans as a nutritional source. The show follows the romance between waitress Sookie Stackhouse (Anna Paquin), who can hear people's thoughts, and her soul mate, 173-year-old vampire Bill Compton (Stephen Moyer). Alan Ball (creator of the Emmy®-winning HBO series 'Six Feet Under') created and executive produces the show, which is based on the best-selling Sookie Stackhouse novles by Charlaine Harris.

Episodes:
Episode 1 Nothing But the Blood
Written by Alexander Woo. Directed by Daniel Minahan.
A shocking murder outside Merlotte's has the town of Bon Temps, and Sookie Stackhosue, reeling.

Episode 6 Hard Hearted Hannah
Written by Brian Buckner. Directed by Michael Lehmann.
Sookie gets company in her search for Godric. Bill confronts his violent past. Sam follows Daphne into the wild.

Episode 7 Release Me
Written by Raelle Tucker. Directed by Michael Ruscio.
A betrayed Sam finds himself in dire straits. Bill's attempt to rescue Sookie is thwarted by Lorena. Jason breaks a church taboo.

Episode 9 I will Rise Up
Written by Nancy Oliver. Directed by Scott Winant.
Eric plays Sookie for a sucker, to Bill's dismay. Hoyt and Jessica meet with Maxine. Sam flies the coop.

Episode 10 New World in My View
Written by Kate Barnow and Elisabeth R. Finch. Directed by Adam Davidson.
Sam and Andy get a chilling reception at Merlotte's. Sookie tried to push through the darkness consuming Tara.

Special Features:
The Vampire Report: Special Edition- Check out the past year's biggest stories in vampire news, politics and popular culture in the special edition of The Perspective with Victoria Davis.
Fellowship of the Sun: Reflections of Light- Rules to live by with Fellowship of the Sun leaders Steve and Sarah Newlin.
Seven Audio Commentaries with the cast and crew including Alan Ball, Anna Paquin, Stephen Moyer, Michelle Forbes, Alexander Skarsgard, Rutina Wesley, Ryan Kwanten, Sam Trammell and many more.