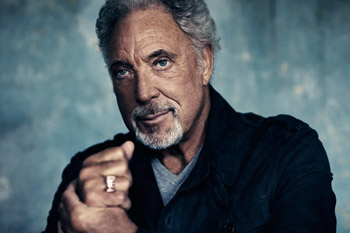 Fresh from his announcement as one of the headline acts at Bluesfest 2016, comes the exciting news that the incomparable TOM JONES will extend his Australian visit to take in a further five headline shows.

Over his 50 year career, Tom Jones has sold more than 100 million records, won a Grammy and two Brit Awards and given us countless hits including; -It's Not Unusual', -Delilah', -Green, Green Grass of Home', -Kiss', -If I Only Knew', -Mama Told Me', -Burning Down The House' and -Sex Bomb'. His career has remarkably gone from strength to strength. Along with sustaining his popularity as a live performer and recording artist for five decades, he has garnered - at the age of 75 - the best reviews of his career for his two most recent albums Spirit In The Room and Praise & Blame.

Tom Jones will grace our shores throughout March, kicking off at Perth's Kings Park and Botanic Garden on the 13th before heading to Adelaide, Hobart, Sydney and Melbourne, with Bluesfest on 28th March closing the curtains on a tour that's not to be missed.

Telstra Thanks is bringing an exciting 48-hour pre-sale just for Telstra customers from 10am Thursday, November 12 until 5pm Sunday, November 15. For more information on how to purchase, visit: telstra.com/music.

Tom Jones has a fundamental interest in a wide range of music and although he is well known for hits, he is first and foremost an artist with a true Rhythm and Blues soul. He has remained a vital recording artist, with his 1999 album Reload the biggest selling (five million) of his then 35-year career.

Jones was knighted in 2006, an honour he was able to celebrate once again in 2012 when he performed at the Queens Diamond Jubilee concert at Buckingham Palace. Other highlights of his long career include receiving BRIT Awards for Best Male and Outstanding Contribution to Music, a Silver Clef Award and a Silver Clef Award for Lifetime Achievement, the Hitmaker Award from the [US] Songwriters Hall of Fame, GQ Man Of The Year and the prestigious [UK] Music Industry Trust Award.

Last month he released his [Sunday Times, UK] best-selling autobiography, Over The Top And Back, alongside the book's companion soundtrack entitled Long Lost Suitcase. He was also engaged in a major fund-raising effort for the BBC's charity Children In Need, headlining a special two-hour television event with his friends in both music and comedy.

Sir Tom is indeed a living legend, one of the few musical artists whose profession began at the dawn of modern popular music who continues to have a vital recording and performing career to this day. His irresistible show traverses musical eras and genres, cuts across class divides and appeals to young and old, male and female, mainstream and cutting edge. Sir Tom has always been about the power of the song, the power of the voice.

Be quick to secure your tickets to Tom Jones' 2016 Australian tour:

Tickets On Sale 10am Tuesday November 17
Telstra Thanks pre-sale: 10am November 12 until 5pm November 15
*Co-promoted by Mellen Events