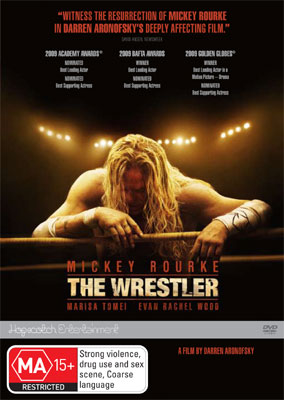 The Wrestler is one of the best-reviewed films of the year. Dynamic and humane, powerful and poetic - the film marks an astounding comeback by actor Mickey Rourke under the masterful direction of Darren Aronofsky (Requiem for a Dream).

Back in the late 1980s, Randy "The Ram" Robinson (Mickey Rourke) was a champion professionalwrestler. Now, 20 years later, he ekes out a living stacking shelves in a supermarket and performingfights for handfuls of diehard wrestling fans in high school gyms around New Jersey. Estranged fromhis teenage daughter (Evan Rachel Wood: Across the Universe, Thirteen) and essentially alone,Randy is a battered dreamer who lives for the thrill of the show.

When a heart attack forces Randy to evaluate his life, he tries to reconnect with his daughter andstrikes up a blossoming romance with an ageing stripper (Academy Award-winner Marisa Tomei: MyCousin Vinny). Yet all this cannot compare to the allure of the ring and passion for his art, whichthreaten to pull "The Ram" back into wrestling.

DVD Extras:
- Within the Ring - A Behind-the-Scenes documentary
- Interview with Mickey Rourke.

Randy "The Ram" Robinson (Mickey Rourke) is introduced in the opening credits of The Wrestler via newspaper clippings and posters as a successful 1980's professional wrestler. Forward to today and Randy is stuck in some kind of time-warp as he struggles to survive with the lowly existence that is now his life. Reduced to living in a trailer park, working in a supermarket and estranged from any family, he desperately hangs on to the threads left of his life whilst trying to find some meaning amidst the desperation of an ageing has-been.

Mickey Rourke isn't just an actor playing the character of Randy "The Ram" Robinson, he becomes and is the character, from the long bottle-blonde locks, the fake tan, the drug use and the staged choreography of wrestling all giving him the total and convincing demeanour. More...
www.femail.com.au/the-wrestler-review.htm


***** "Excellent and uncompromising. This is a wonderful film." Margaret Pomeranz, AT THE MOVIES
***** "An astonishing performance. Stunning...A sensation that blows convention apart... Will pin you to the canvas." EMPIRE
***** "Mickey Rourke gives the performance of his life... Moving beyond words. The Wrestler is a cinematic triumph". ROLLING STONE