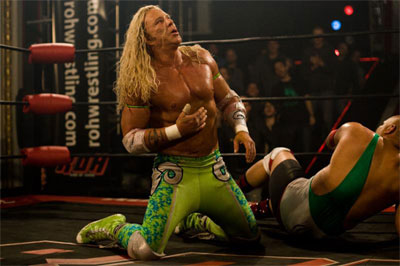 Synopsis:
Back in the late 80's Randy "The Ram" Robinson (Mickey Rourke) was a headlining professional wrestler. Now, 20 years later, he ekes out a living performing for handfuls of diehard wrestling fans in high school gyms and community centres around New Jersey. Estranged from his daughter (Evan Rachel Wood) and unable to sustain any real relationships, Randy lives for the thrill of the show and the adoration of his fans. However, a heart attack forces him into retirement. As his sense of identity starts to slip away, he begins to evaluate the state of his life - trying to reconnect with his daughter, and strikes up a blossoming romance with an aging stripper (Marisa Tomei). Yet all this cannot compare to the allure of the ring and passion for his art, which threatens to pull Randy back into his world of wrestling.

My Verdict:
Randy "The Ram" Robinson (Mickey Rourke) is introduced in the opening credits of The Wrestler via newspaper clippings and posters as a successful 1980's professional wrestler. Forward to today and Randy is stuck in some kind of time-warp as he struggles to survive with the lowly existence that is now his life. Reduced to living in a trailer park, working in a supermarket and estranged from any family, he desperately hangs on to the threads left of his life whilst trying to find some meaning amidst the desperation of an ageing has-been.

Mickey Rourke isn't just an actor playing the character of Randy "The Ram" Robinson, he becomes and is the character, from the long bottle-blonde locks, the fake tan, the drug use and the staged choreography of wrestling all giving him the total and convincing demeanour. Trying to reach beyond the irresistible and addictive world of wrestling, he befriends Cassidy, an ageing single-mum lap dancer/stripper, played with emotional flair by Marisa Tomei. She suggests he reconnect with his estranged daughter, Stephanie (Evan Rachel Wood) but this is fraught with doubt and guilt, highlighted by an extraordinary emotional scene between Randy and Stephanie when he tries to explain his decisions about his past. Watching Rourke tell his daughter that he stuffed up with a speech that includes "I'm an old broken down piece of meat... " is one of those rare flawless cinematic moments.

There are numerous wrestling matches on screen with some fairly graphic but not gratuitous violence that might make some uneasy but then wrestling isn't intended for the meek. There is also the drug-taking and harsh language that runs parallel to the matches that is made more realistic via the use of hand-held camera throughout. Just to level out some of the harshness, there are some comical scenes involving Randy at work behind the service deli counter at the supermarket, so it's not all heavy going and emotionally draining.

Director, Darren Aronofsky has created a compelling film that is often brutal and bloody with subtlety often deliberately ignored in order to achieve credibility and he has educed an unforgettable performance from Mickey Rourke where it's hard to find the right superlatives that really communicate such an intense, powerful and incredible performance. Fittingly summarised by the original song "The Wrestler", written and performed by Bruce Springsteen over the closing credits, Rourke will undoubtedly deserve any awards and accolades that come his way and guaranteed, there'll be plenty of them.