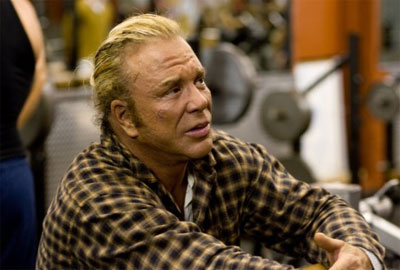 Back in the late '80s, Randy "The Ram" Robinson (Mickey Rourke) was a headlining professional wrestler. Now, 20 years later, he ekes out a living performing for handfuls of diehard wrestling fans in high school gyms and community centres around New Jersey.

Estranged from his daughter (Evan Rachel Wood) and unable to sustain any real relationships, Randylives for the thrill of the show and the adoration of his fans. However, a heart attack forces him intoretirement. As his sense of identity starts to slip away, he begins to evaluate the state of his life - tryingto reconnect with his daughter, and striking up a blossoming romance with an aging stripper (MarisaTomei). Yet all this cannot compare to the allure of the ring and passion for his art, which threatens topull Randy "The Ram" back into his world of wrestling.

"Talk about comebacks. After many years in the wilderness and being considered MIA professionally,Mickey Rourke, just like the washed-up character he plays, attempts a return to the big show in "TheWrestler." Not only does he pull it off, but Rourke creates a galvanizing, humorous, deeply movingportrait that instantly takes its place among the great, iconic screen performances. An elementalstory simply and brilliantly told, Darren Aronofsky's fourth feature is a winner from every possible angle.Strongly evokes the gritty working-class atmosphere of numerous '70s dramas. The film has the clarityand simplicity of a great Hemingway short story -- there's nothing extraneous, the characters mustface up to their limited options in life, and the dialogue in the superior script is inflected with thepoetry of the everyday. Exhilarating, funny and moving." Todd McCarthy, Variety