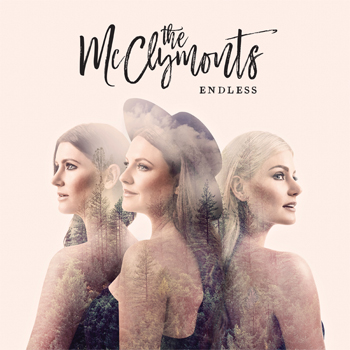 It's a big day for fans of multi award winning group, The McClymonts who have announce details of a new studio album as well as the release of a brand new single and dates to their first leg of a national tour.

The single, entitled 'House" is available for download and streaming today and is the first taste of their new studio album, -Endless'. Released on Friday 13th January, 2017 the album will be supported by a national tour which will commence on Wednesday 25th January at the Tamworth Regional Entertainment & Conference Centre on sale at 9am AEDT on Wednesday 19th October.

-Endless' is the fifth studio album for sisters Brooke, Sam & Mollie and marks the first time that they have worked with producer/songwriter Andy Mak (Tina Arena, Boy & Bear) who recorded the album in Sydney and the Central Coast. -Endless' follows the highly successful 2014 album -Here's To You & I' which garnered three hit singles including 'Forever Begins Tonight" and saw the girls receive two Golden Guitar Awards for -Group or Duo of the Year' and -Top Selling Album of the Year' in 2015.

-Endless' was written and recorded during one of the most rewarding years in the bands history, both professionally and personally. As a trio The McClymonts this year undertook a highly successful -10 Years of Hits Tour', playing sold out venues and receiving rave reviews. Individually Brooke made her acting debut in the feature film -Spin Out', Sam took on the role of host of the ninth season of the reality dating show -The Farmer Wants A Wife' and Mollie gave birth to her first baby, Ned.

Mollie commented on the album title, ''Endless' reflects how we're feeling about our lives right now and our love and dedication to our family and also for music. We will be doing this forever – that's our plan."

That happiness and gratitude shines through in the song's lyrics. Lead single 'House" includes the lines 'I used to always be thinking about everything I'm not, instead of everything I've got". Meanwhile the album's title track may be a contender for -wedding song of the year' and talks of their 'Endless" love for their respective husbands. Meanwhile songs like 'Nothing Good Comes Easy" and 'Like We Used To" acknowledge that while the girls are in a good place personally it doesn't come without hard work and sacrifice.

Brooke reflects on the songwriting inspiration, 'We got to connect with so many fans and friends on the '10 Years of Hits' tour and as you hear their stories we realised that there are a lot of people that have grown up with our music and they are going through the same feelings, whether positive or negative as we do and in a way -Endless' is a diary of our lives right now which can be just as relevant to someone else's life as it is to ours".

-The Endless Tour' will be the most expansive of their career to date and will take in locations they have never played or have not been to for some time. Brooke, Sam & Mollie want to assure the fans that the tour will be rolled out in stages and if you don't see a town near you right now then keep on watching as more dates will be announced.

Sam commented on what fans can expect from the new show, 'It's always fun when you add new songs to the setlist and in addition to the new songs fans will get the ones they know like 'Wrapped Up Good" and 'Kick It Up" and 'Forever Begins Tonight".

The McClymonts are acknowledged as Australia's #1 Country Group and throughout their ten-year career they have released four studio albums which have achieved 2 x Gold Sales Accreditations, 10 x Golden Guitar Awards, 2 x ARIA Awards, an APRA Award and a CMA (Country Music Association U.S) Award for Global Artist of the Year. They have released twenty hit singles and toured extensively throughout Australia and the U.S. They are Ambassadors of Toyota Australia and charity organisations the McGrath Foundation and Legacy Australia.

More shows to be announced…