2010 Best Picture Oscar™ winner The Hurt Locker is a riveting, suspenseful portrait of the courage under fire of the military's unrecognised heroes: the technicians of a bomb squad who volunteer to challenge the odds and save lives doing one of the world's most dangerous jobs.

If war is hell, why do so many men choose to fight? In an age when armies consist not of draftees but of volunteers, and men willingly thrust themselves into military action, sometimes the rush of battle is a potent and alluring attraction, even an addiction.

The Hurt Locker is an intense portrayal of elite soldiers who have one of the most dangerous jobs in the world: disarming bombs in the heat of combat. When a new sergeant, James (Jeremy Renner), takes over a highly rained bomb disposal team amidst violent conflict, he surprises his two subordinates, Sanborn and Eldridge (Anthony Mackie and Brian Geraghty), by recklessly plunging them into a deadly game of urban combat. James behaves as if he's indifferent to death. As the men struggle to control their wild new leader, the city explodes into chaos, and James' true character reveals itself in a way that will change each man forever.

From visionary filmmaker Kathryn Bigelow, The Hurt Locker is based on first-hand observation by journalist and screenwriter Mark Boal who was stationed on assignment with a special bomb unit. Starring Jeremy Renner (Dahmer, The Assassination of Jesse James), Anthony Mackie (Half Nelson, We Are Marshall) and Brian Geraghty (We Are Marshall, Jarhead), the film couples grippingly realistic action with intimate human drama to portray soldier psychology in a high-risk profession where men volunteer to face deadly odds.

"A near-perfect war film; Jeremy Renner slowly reveals the strength, confidence and unpredictability of a young Russel Crow. Writer Mark Boal and Director Kathryn Bigelow pooled their complimentary talents to make on of the rare war movies' this one's the tops." TIME 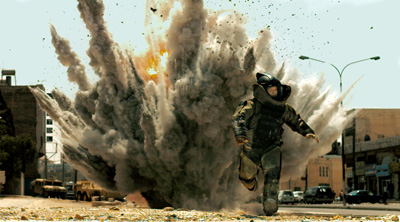