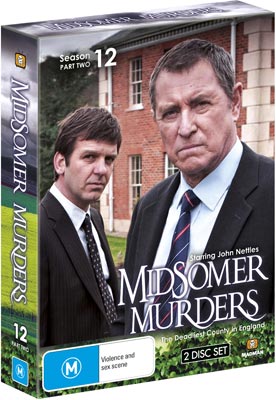 The deadliest county in England

Small Mercies
The mysterious murder triggers a dark series of events which see Barnaby and Jones uncovering affairs, tragedy and long-held family secrets. The busy body Compton sisters do not want to see the village change, however the tawdry web of relationships within the community lead to complications, with dire consequences. Are there one too many dysfunctional families in Little Worthy?

Guest stars David Ryall, Margaret Tyzack and Caroline Blakiston.
Screenplay by Peter Hammond.
Directed by Peter Smith
The Creeper
Midsomer has been hit with a wave of burglaries by a master house-thief who defies even stringent home security and has been dubbed The Creeper. It is only when the Chief Constable is on the receiving end that Barnaby is called into action and, when a body is found, the investigation moves from petty theft to personal agendas. Barnaby is convinced there is more to discover, unravelling the long-standing social affairs of gentry and gangsters alike in his quest to stop The Creeper.

The Great and the Good
The local village school is threatened with closure due to falling numbers of children, and a group of ladies who lunch compete murderously for the status of charitable saviours. As murder and mayhem engulf the embattled school teacher she is rescued by the love of Barnaby's prime suspect, until his innocence is proved and love conquers all.