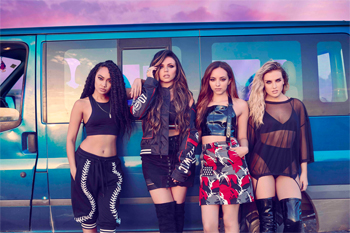 The world's biggest girl group, Little Mix, are thrilled to announce that they're bringing their brand new arena tour to Australia in July of next year - The Glory Days Tour 2017.

'Aussie Fans! We are so excited to bring our Glory Days tour Down Under!" – Little Mix

The Glory Days Tour will kick off in the USA on Thursday February 2nd, and will be the second time Little Mix tour Australia, following on from their massive Get Weird east coast tour last May.

Tickets go on sale at 10am Monday, December 12.

Telstra Thanks is bringing an exciting 48-hour pre-sale just for Telstra customers from midday Wednesday, December 7 until midday Friday December 9. For more information on how to purchase, visit: telstra.com/music.

Fans can expect songs from their brand new, ARIA #2 album Glory Days (through Sony Music Entertainment), including the cheeky lead single -Shout Out To My Ex', as well as their mega hits -Hair', -Wings', -Move', -Change Your Life', -Secret Love Song' and -Black Magic'.

Perrie Edwards, Jesy Nelson, Leigh-Anne Pinnock and Jade Thirlwall formed as Little Mix in 2011. Since then they have without doubt become one of the biggest pop acts on the planet, racking up 12 million global sales and three UK #1 smash hits. UK #1 album Glory Days is the quickest selling album in the UK charts by a girl group since Destiny's Child's Survivor in 2001.

Their third album Get Weird, released last year, is their most successful to date selling an amazing 1.5 million copies worldwide, also debuting at #2 on the ARIA Album Chart. The accompanying tour saw them play an incredible 60 shows across the UK and Europe, Asia, and here in Australia, selling in excess of 500,000 tickets.

The group recently won 'Best Music Act' at the 2016 Glamour Women of the Year Awards and has amassed a staggering one billion YouTube and Vevo views worldwide.

Tickets On Sale 10am Monday December 12