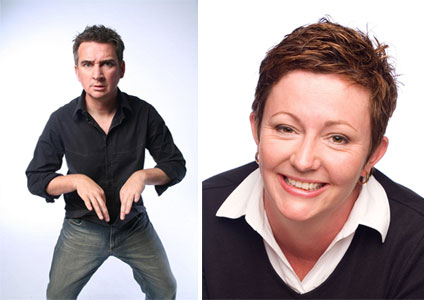 "Archaeologists" have just discovered the "manuscript" that contains the original lyrics to Katy Perry's single "I Kissed A Girl". The song, it appears, was first intended to be about the quality of live comedy in rooms around Melbourne and the first draft of the lyrics read: "I saw some comedy and I liked it...."

"Scholars", having studied these "scrolls", believe Perry was in fact referring to the comedy at The Comedy Lair in Kensington. However, it is understood "record company executives" demanded the song be "lezzed-up a bit", and so has since been altered accordingly....

Despite this, Perry's "completely fabricated" inspiration, The Lair continues to present live comedy on the first Wednesday of each month, with the next show coming up on Wednesday 3 September....

Damian Callinan, being practically snatched from the arrivals lounge at Tulla, will be match fit after a month performing in Edinburgh and is our September headliner. MIX FM's George McEncroe, usually up early for breakfast show Two Women and a Metro, will be staying up late and making her debut in The Lair as MC for the evening.