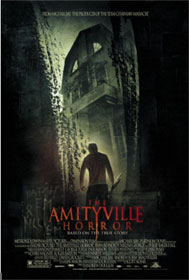 For Gods Sake - Get Out

Synopsis:
On November 13, 1974, Suffolk County Police received a frantic phone call that led them to 412 Ocean Avenue in Amityville, Long Island. Inside the large Dutch Colonial house, they discovered a horrific crime scene that shattered the landscape of the typically peaceful community: an entire family had been slaughtered in their beds. In the days that followed, Ronald Defeo, Jr., confessed to methodically shooting his parents and four siblings with a rifle while they slept, claiming "voices" in the house drove him to commit the grisly murders.

One year later, George (Ryan Reynolds) and Kathy Lutz (Melissa George) and their children moved into the house thinking they'd found their dream home. But shortly after settling in, bizarre and unexplainable events began to occur - nightmarish visions and haunting voices from an evil presence still lurking within the house. 28 days after moving in, the Lutz family abandoned the residence, lucky to escape with their lives.

My Verdict:
Young couple, 28 year-old George and 30-year-old Kathy Lutz, with Kathy's three children from a previous marriage (the children's father is dead but we don't find out why), find what they think will be their dream home but are hesitant because the house is too cheap - there has to be a catch. The real estate agent reluctantly informs the Lutz's of the history of this house in Amityville, Long Island, where Ronald Defeo slaughtered his entire family - all six of them -claiming the voices in the house told him to commit the most heinous of crimes. Not believing the history of the house will affect them, the Lutz's buy the house and move in, but from day one, mysterious things start to happen. By day 28, the Lutz's escape from the influence the house has and flee, never to return, not even to collect personal possessions.

As George Lutz, Ryan Reynolds has a big, powerful presence. He is trying to be a friend to Kathy's three children, knowing they still miss their dead father but from the minute he steps into their new home, cracks appear in his behaviour and manner. He becomes almost obsessed with the basement, even sleeping there, and experiences episodes where he hallucinates, especially seeing people connected with the house, including the deceased Defeo family members. George gradually starts to treat Kathy with apathy and indifference but when is treatment of the children extends to abuse, Kathy steps in, protective mother that she is. George eventually becomes a bloodshot-eyed potential murderer himself, which inspires a desperate Kathy to research the houses' history at the local library and to ask the local priest for advice. Philip Baker Hall is the priest, whose very under-developed role should have offered more. Kathy is left to fend off George by herself and to try and save her family from destruction.

Melissa George is a very believable Kathy Lutz, displaying a solid performance as a caring mother. The three children, Billy (Jesse James), Michael (Jimmy Bennett) and Chelsea (Chloe Moretz) are also good and try to come to grips with the unfolding events. Chelsea even invents an imaginary friend, Jodie, to try to deal with the situation. It is the five members of the Lutz family that dominate the screen time.

The movie is set in 1975 though there aren't enough extra wide collars on the shirts and flares on the jeans, so sometimes it feels as if it could be the present. The hallucinations that George experiences are pretty gruesome as far as blood and gore go, even if their screen time is sometimes very brief, but there is still enough to be explicit with the intention and as far as the scare factor goes -not overly significant.

'The Amityville Horror'(2005) is a generic attempt to recapture the success of the original movie by exposing it to those who may have missed the original. It is a scary story more so for the fact that it is based on true events.