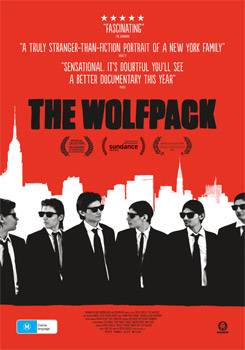 Synopsis: Six brothers, known as -The Wolfpack', grew up surrounded by the bustling electricity of New York City, but were trapped within the confines of their Lower East Side apartment. Living under the rule of their tyrannical father, and home schooled by their loving mother, they spent their entire lives locked away from society. All they knew about the outside world was gleaned from their archive of over 10,000 films they watched obsessively and re-enacted meticulously, using elaborate homemade props and costumes to re-create what they experienced on screen. For years they used these films to fuel their imagination and stave off their loneliness, until one of the brothers dared to escape.

Trusted with unprecedented access, director Crystal Moselle crafts a mesmerising portrait of an extraordinary family, capturing the thrill of the Wolfpack's discoveries as they enter society and learn about the world outside their four walls. THE WOLFPACK is an incredible coming of age story and a true example of the power of movies to transform lives.