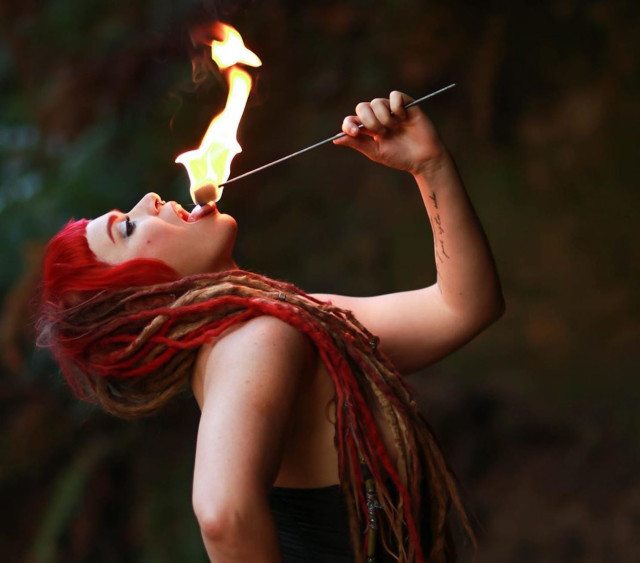 "Cooped-Up Cabaret: A Live Stream Variety Show" launched on Saturday, 4 April to a sellout audience - proving to be an innovative and original market leader in the online entertainment arena. Producer Sophie deLightful has successfully found a monetised home for live-action cabaret in a digital landscape which has been flooded with donation-based and free performance offerings since Covid-19 enforced isolation.

The 4 April launch featured a diverse cast from Australia and New Zealand, with acts including burlesque, cabaret, drag, fire performance, aerials, LED flow arts and clowning. Viewers tuned in from the UK, Canada, Sweden, Australia and NZ. With households only required to purchase one $15 registration to access the cabaret, viewers were encouraged to use the money they had saved on tipping their favourite performers. This proved a massive success, and alongside earnings from ticket sales, contributed to each act receiving the same average wage of a performance in a regular venue.

In a somewhat unorthodox use for Zoom's Webinar capability, this business conference platform has been transformed into a pay-to-view live stream variety show. Viewers pre-register to secure a front row seat using a Paypal-integrated form. During the show, all non-performing participants can interact using the comments section and tip via PayPal.

To avoid people missing out on future shows, Sophie has upgraded the webinar capacity to 500 viewers. "It is important, in these times, to give people an opportunity to not only appreciate but support the arts," she explains. "This cabaret shows that people still value what we do, and is a truly inspirational example for other creatives who may be feeling lost or unmotivated in isolation."

Question: Looks like your first live stream was a great success, how did you come up with this idea?

Sophie deLightful: As most people know, the effect of Covid-19 on the arts sector was pretty immediate. Seemingly overnight, I was faced with the loss of all my future bookings, paired with the uncertainty of my foreseeable future. I started seeing a bunch of performers offering their work online - bands playing a set, variety shows pieced together with pre-recorded acts and other more complex multi-location free concerts. All of it free. I was determined to create a concept that paid its performers beyond a few sporadic donations, placing value on the arts and activating the community I knew was out there that loved being part of a cabaret show. Because it's not just the performers who make a show, it's the audience too! I needed to create a way that things happened live, where people could comment and tip their favourite performers, and everyone could feel part of the experience. Also, a chance for performers to do what they loved, and have something creative to look forward to. I knew my vision, but not the technology side of it, so I sought guidance from my tech-savvy friends and was pointed to Zoom's paid services. Long story short, here we are with a sold-out live stream cabaret under our belts, and five more shows rearing to bust out of the gates every fortnight! 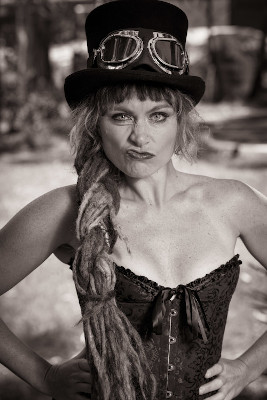 Question: What can you tell us about your cabaret show Cooped-Up?

Sophie deLightful: This is actually such an exciting project, I could go on for hours! What began as somewhat of a social experiment has really taken on a life of its own, with people tuning in for the first show from the UK, Sweden, Canada, New Zealand and Australia! We featured performers from Australia and NZ, with a diverse range of skills including burlesque, drag, cabaret, clowning, flow arts, aerials and fire performance. The upcoming shows are going to be equally as thrilling, and I'm excited to unleash them all onto the world. That's what's great about live streaming - there is no limit to where our performers or audience want to experience it from. From what I have seen and been told by performers I know locally and internationally, this is the only show which has successfully managed to monetise performance in a live-action format. It is not only invigorating but heartwarming to see the response from people out there, and I really think it's a welcome source of interactive entertainment for their Saturday nights which also gives an opportunity to support the arts sector.


Question: What research did you do prior to starting the live stream Cooped-Up Cabaret show?

Sophie deLightful: Much of it was technology based. I don't profess to be super knowledgeable but normally once I research enough, I can generally grasp a new concept. This, on the other hand, was completely new territory and it was hard to sift through all the different platforms out there. So much research consisted of not only Googling but talking to my more knowledgeable friends about what I wanted to do, and what could help make it happen. I also checked through what was currently happening on Instagram and Facebook live platforms, to see if something like this existed. As far as I could tell, it didn't, and I still think it doesn't. Once I found the platform I believed could do all the things I needed it to, I got stuck into the FAQ section to figure out the smaller details (goodness knows Zoom has little time to answer chat queries right now!). From there, it was just contacting my network of performers and creating a Performers page so it could all be centralised, and I could figure out who was keen on being involved.


Question: Can you tell us how important it is to try and raise some money?

Sophie deLightful: I want to make something clear here. I am not raising money, I am attempting to pay performers for their art, and THAT is indeed important. Since 2015, I have been producing cabaret and community circus events, and always I have strove to not only lead in compensating my performers but be transparent, efficient and reliable with my payments. Nothing has changed with Cooped-Up Cabaret. It is so important, nay vital, that performers continue to be paid for their art through this period. We are not getting paid to perform any other way, and while I understand that sharing their art online is a great outlet, it is contributing to the devaluation of art and lack of perspective that it is a fulltime career and a worthwhile practise to be funded by our government. It is so fantastic that the community came on board with this concept for the launch show, and through a combination of ticket sales and tips, I was able to pay performers on average more than I usually pay them in a regular club gig. My performers deserve it, the industry deserves it.


Question: Do you have your own part in the show?

Sophie deLightful: On top of producing the show, I also feature as the host alongside my good friend and longtime performance partner, Timothy Christopher Ryan. We both perform our own acts amongst the lineup in each show.


Question: Who inspired your passion for cabaret?

Sophie deLightful: I can't narrow that down to just one person. WHAT inspired my passion for cabaret? Now that's easier to answer! Every time I would go to a burlesque or cabaret show, I would be inspired by the performers in it, for a myriad of reasons. They all had something to offer, something to teach, learn from or aspire to. I found it insatiably irresistible, and I couldn't wait to be a part of it! There's so many characters over the years that have made important contributions to cabaret, it's wonderful just to absorb them all and create your own path using their influence mixed with your own strengths and interests. And it's a never-ending journey... each new act is a new discovery inspired by a different muse!

Sophie deLightful: Shows run every fortnight, and the tickets for the next show will be made available the Monday after the previous show. The next show is Saturday, 18 April, and the ticket link is: https://us02web.zoom.us/webinar/register/WN_Cu_-nqlvRoiFD_NvfVy1zQ. You can keep updated at facebook.com/events/198072748296249/