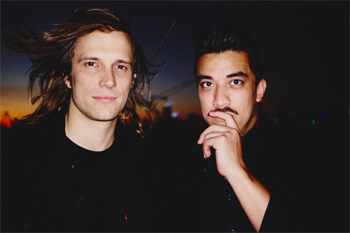 Having only just set their feet back on Sydney soil after last weekend's killer performance at St. Kilda Festival (VIC) and The Mountain Goat Valley Crawl (QLD), Polish Club are ready to party all over again.

The howling Sydney rock-soul duo today have dropped their second single and video for 'Come Party' and made the announcement that their highly anticipated debut album Alright Already will be out on Friday March 31st supported by their biggest headline tour to date.

'Come Party', which premiered on triple j's Good Nights, is like a rope tied to your hips which jerks your body sideways in double time and won't let go. All sweat-spattered drum-skins and grunting hyper-agitated guitar, it's under three minutes of exhilarating garage soul that makes your blood fizz and your ears sing like trash can falling down a set of concrete stairs.

Novak, the band's guitarist and vocalist says about the song, "Your mate seems to be having fun, or at least his version of it. Ordering doubles, shouting at people, going through a laundry list of how you're killing his vibe. An oppressive amount of "fun". It's off to the next bar. You should probably call it, but they're sure this is the place that will kick it up a notch. Before you can stop to think if this will be actually fun, they're calling at you. You can do whatever you want afterwards, but you're not bailing on this. Have fun later. Come party with me."

The video directed by Leilani Croucher and produced by Revolver features Sydney creative Yasmin Suteja, Leilani explains her vision for the video as, "Perfection, beauty, innocence....what hides beneath the ultimate facade....For the 'Come Party' video I wanted to explore the romance of what lurks beneath and in doing so created a new 'Polish Club', a slice of pure unbridled pop or so it would seem."

'Come Party' is one of 14 uniformly irresistible songs destined to make 'Alright Already' one of the most talked about rock & roll albums of 2017. Novak and John-Henry (drums) released the first taste of their debut album with the single 'Beat Up', a blast of raw, crashing soul. Instantly added to triple j the single release was highlighted by the lads first national headline tour which saw their Sydney, Melbourne, Brisbane and Wollongong shows hastily sell out.