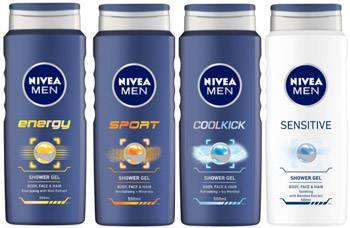 Nearly 90% (88%) of Aussie guys admit to having a wash with female shower products, borrowing your body wash and taking a squeeze of your shampoo here and there. While this might seem harmless, across the nation it's costing Australian women $350 million – that's an average of $177 you could be saving every year.

The NIVEA MEN Shower Report discovered that, every year, an average of 4.1 litres of your product is being used by the man in your life. Across the country, that's 8 million litres of female shower product being used annually – it's a wonder why more men don't smell of roses!

Alarmingly though, don't think they draw the line at your shower products – almost a quarter  (24%) of men will take your towel too.

So what is it that makes a guy use your toiletries? Mainly, it's because they've run out of their
own stuff (42%), or are too lazy to buy it in the first place (15%). This could be why nearly a quarter (24%) of women have resorted to removing their products from the bathroom.

Now there's hope for everyone! The experts at NIVEA MEN understand that your man wants
convenient, no-fuss and effective products so has created new NIVEA MEN 3-IN-1 Shower Gel for body, hair and face. This means you can now proudly display your products and feel safe in the knowledge that he's using his own.

Featuring four shower gels - Energy, Sport, Cool Kick and Sensitive – the range is designed to
leave the man in your life feeling clean, refreshed and revitalised all over. The shower gels are
dermatologically approved, pH skin balanced and features unique formulations and
invigorating scents to help keep his skin from feeling dry and tight, while he is left feeling
energised long after the suds have disappeared.

NIVEA MEN Sport 3-in-1 Shower Gel: The perfect gym bag companion, this rejuvenating gel is packed full of minerals and a fresh citrus scent to cleanse and hydrate hair, face and body.

NIVEA MEN Cool Kick 3-in-1 Shower Gel: For an instantly refreshing feeling that lasts all day, this blue gel formula with icy menthol and an exhilarating scent cleanses and replenishes moisture to the skin.

NIVEA MEN Sensitive 3-in-1 Shower Gel: A gentle gel containing nourishing bamboo milk and a calming scent to cleanse and soothe skin without drying it out.

Help your man unlock his full potential by starting his day right with NIVEA MEN. When the 3-IN-1 Shower Gels feel good on his skin, he'll start to feel good in his skin, giving him a daily boost of confidence to get the most out of his day and achieve his goals. NIVEA MEN 3-In-1 Shower Gels are the perfect portable solution for any man's grooming routine.

Now you can both enjoy the shower experience, while you start making savings! To help you figure out exactly how much you could be saving, NIVEA MEN has even created a shower savings calculator. Visit the Facebook page for your individual prediction.