Trying to ease your partner into a grooming change can be stressful – you've mentioned his chapped lips and now he's self-concious. And this only leads to an argument and not a run to the chemist for lip balm! It can be a sensitive topic – men have feelings, too! – and so should be approached delicately.

Your sink looks like a barber floor
Most men are guilty of this – lining up their beard over the bathroom sink leaving stubbled hair over the vanity, tiles and walls. You shouldn't have to clean it up, and we know this, so I'm sorry on behalf of all bearded men. To make good, an electric shaver like the Philips Vaccuum Beard trimmer, which is designed to catch hair as you shave, should do the trick. Think Valentine's Day gift to make the suggestion subtle.

He has chapped, cracked lips
Let's face it, most men tend to consider moisturising as an afterthought. So asking him to add lip balm to the equation could be almost impossible. The best way to sort his lips out is to offer him some of your colourless and unscented lip balm when you're using it, commenting on how great his lips will feel. He'll eventually get the message, and it'll become a grooming priority. 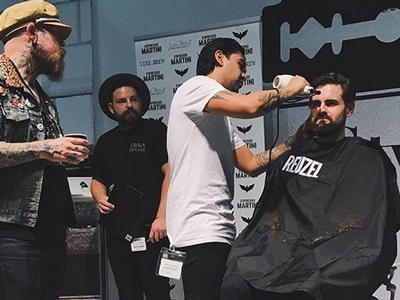 What if you hate the way his facial hair looks?
Struggling to tell your partner you dislike his faical hair? It has to suit his face shape, be groomed well and fit his personality. If you've been looking for a way to broach the subject, choose a celebrity who has a similar profile as your partner and casually suggest he'd look great with a similar beard. Book him an appointment with his local barber or use the Philips Laser Beard Trimmer at home to create the look.

He has enough hair gel to be cast in Greace
Hair gel can be an absolute saviour, but the crunchy hair look is better left in the 80s. If your man is a serial gel-overuser, you've got to help him make the change. Gift him a new hair balm or clay as it's likely that the product he's been using isn't right for his hair. If you're feeling a little more generous, book him an appointment with his local barber – he'll have a relaxing afternoon and pick up some tips along the way, and you'll never have to raise the issue again.