Mt Buller to Shred in a Dress 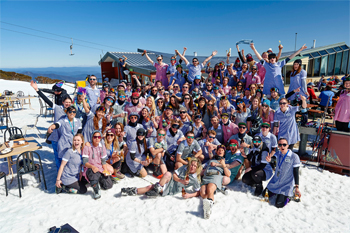 Mt Buller to Shred in a Dress

The Mt Buller community will be hitting the slopes in school dresses on Wednesday September 7, in a bid to raise funds to help educate girls in Africa. It's all part of Australian charity, One Girl's annual -Do It In A Dress' campaign, which calls on people all over the world to complete challenges in school dresses to raise awareness and much needed funds to educate girls across Africa. In 2015 over 1200 people from all over the world wore school dresses, and together raised over $485,000 for One Girl's projects, which enabled them to educate over 4,000 women and girls through their various programs in Sierra Leone and Uganda.

Mt Buller's event, named -Shred In A Dress' to reflect its snowsports focus, is now in its fourth year. With a mission to raise $6,000 to educate 33 girls in Africa for an entire year, the day will see upwards of 120 skiers and snowboarders donning their school dresses on the slopes, followed by parties with live music at venues across Mt Buller. All proceeds go to the Australian charity.

In what is now an annual event, Mt Buller is calling on fellow snow lovers to get on board and wear a school dress to have fun and support this worthy cause.  Every participant who purchases a dress from One Girl will automatically go in the draw to win some fantastic prizes, including accommodation vouchers from the Sebel Pinnacle Valley Resort and dinner vouchers from Black Cockatoo Restaurant.

Chantelle Baxter, Co-founder of One Girl said the value of sending just one girl to school is undeniable. 'It only costs $300 to send a girl in Sierra Leone to school for a whole year. With passionate supporters like Mt Buller lending its voice to this cause, we hope to see -Shred In A Dress' spread globally, so we can educate more girls."

'Girls in Africa can benefit from education in a supportive environment, marry later, have a smaller and healthier family, and for every year a girl stays in school it'll increase their income by at least 10%, investing 90% of it back into her family. It doesn't matter what challenge you do, just as long as you do it in a school dress!"

For further information about One Girl and to register for the -Shred In A Dress' campaign, visit http://www.doitinadress.com/team/mount-buller.