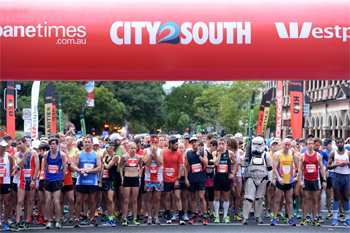 Brisbane's most picturesque fun run is back in 2017, when thousands of entrants will hit the streets of the CBD for the Brisbane Times City2South presented by Westpac on Sunday 4 June, 2017.

Into its fifth year, the City2South kicks off of the first event of the City Run Series this year, with the event catering for elite runners, joggers and walkers to tackle Brisbane's most spectacular course.

Starting on William St in the Brisbane CBD and finishing in South Brisbane's Musgrave Park, tackle the 14km across the iconic Brisbane River or the revamped and more accessible 5km course from the University Queensland's St Lucia campus.

Registrations are open from March 22, with those who enter before April 11 going into the chance to win 2 x Singapore Airlines flights to the value of $5,000. Visit www.city2south.com.au