2018 Australian of the Year Awards 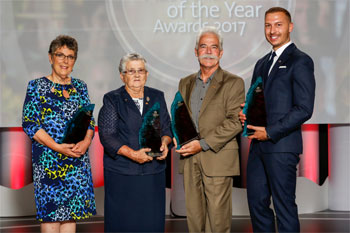 2018 Australian of the Year Awards

Nominations are now open for the 2018 Australian of the Year Awards and you have an important role to play in the search for our nation's finest.

Nominate online at australianoftheyear.org.au or call 1300 655 193 for assistance in submitting your nomination. Nominations close midnight on Sunday 6 August 2017.

National Australia Day Council CEO, Chris Kirby, said it only takes one nomination for someone to be in the running for the Awards, but a nomination must be submitted.

'Nominating is quick and easy, so play your part in the search for Australians doing remarkable work, helping others and making a difference," said Mr Kirby.

'The person you nominate could be the next Australian of the Year, so nominating is a really important and powerful thing to do – you can have a big impact on someone's life."

'While I never set out to be Australian of the Year, the Award has given me the opportunity to bring attention to the importance of science in our world," said Emeritus Professor Mackay-Sim, who was honoured for his lifetime of dedicated research and international leadership which has led to ground breaking advances in the treatment of spinal cord injuries.

'A simple nomination from someone who knew of my stem cell research work has resulted in an enormous honour.

'Knowing the difference it can make, I encourage everyone to submit a nomination for someone whose contributions or achievements should be recognised."

The Commonwealth Bank is proud to have a long-standing partnership with the Australian of the Year Awards.

General Manager of Brand, Sponsorship & Marketing Services, Stuart Tucker, said nominating someone for the Awards was an ideal way to say thanks to friends and colleagues for their efforts and contributions.

'Nominating someone for the Australian of the Year Awards is something everyone can do and it's a great way to recognise people who often are very humble but make a very big difference to Australian society," said Mr Tucker.

How the Awards process works:

Approximately 3,000 individuals are nominated in the Australian of the Year Awards each year

Once nominations close at midnight Sunday, 6 August 2017, they will be sorted into the four Award categories in each State and Territory

Up to four finalists are selected in each category, from which Award recipients in each State and Territory are announced in late 2017 (it's these people who then go on to be considered for the national Awards)

The national Awards are decided by the Board of the National Australia Day Council and are announced on January 25, 2018

Nominees must be Australian citizens

Nominees must be at least 16 years of age

You can't nominate yourself

Anyone can nominate some for the Australian of the Year Awards.

Demonstrated excellence in their field

Significant contribution to the Australian community and nation

An inspirational role model for the Australian community

For more information on the Awards process, visit http://www.australianoftheyear.org.au/the-awards/criteria/