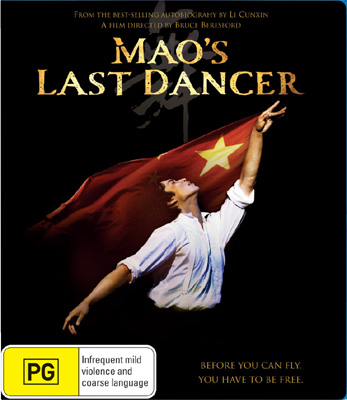 MAO'S LAST DANCER captures theintoxicating effects of first love and celebrity, thepain of exile, and ultimately the triumph of individualendeavour over ideology. Filmed in China, the US andAustralia and with a brilliant performance from CHICAO as Li Cunxin, and a star-studded cast includingKYLE MCLACHLAN, AMANDA SCHULL and JACKTHOMPSON, MAO'S LAST DANCER is an exhilarating exploration of what it means to be free.

Boasting an impressive $15 million at the cinema box-office, and more than 300,000 in booksales, MAO'S LAST DANCER is the inspiring film you'll want to watch time and time again.

"We must be thankful that Beresford's grand, lucid and absorbing film tells [Li's] story with such passion andconviction." THE AUSTRALIAN

Review: The compelling story on a Chinese born dancer, destined to showcase his talents to the world. When Li is given the opportunity to go to America to learn, he is quickly discovered by those who can appreciate is extraordinary talent. He meets a female dancer who he starts dating, and in a desperate attempt to stay in America marries. Li goes on to become one of the best dancers of his time, although his marriage fails. This is a story of freedom and following your dreams.