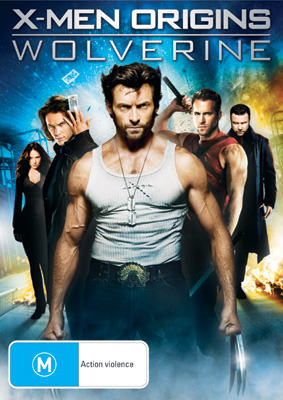 Experience the very first chapter of the high-octane X-Men saga through the eyes of a true Marvel legend when X-Men Origins: Wolverine arrives on Blu-ray disc with bonus Digital Copy disc and Single Disc DVD including Digital Copy October 14 from Twentieth Century Fox Home Entertainment. Hugh Jackman reprises the role that made him a superstar, as the fierce fighting machine who possesses amazing healing powers, adamantium claws, and a primal fury known as berserker rage. Spanning over 150 years, X-Men Origins: Wolverine chronicles young James Logan and his tortured past... from boy, to man, to mutant. From conflicts with his half brother Victor Creed - aka Sabretooth (Liev Schreiber; Defiance), his membership in Team X, his infamous adamantium rebirth and the total memory loss that ultimately fuels his angry quest, X-Men Origins: Wolverine paints the vivid and difficult roots of rage of the legendary superhero.

Directed by Gavin Hood (Tsotsi) from a script by David Benioff (The Kite Runner) and Skip Woods (Hitman), X-Men Origins: Wolverine delves deep into the X-Men universe by introducing comic-book mainstays into the film including Ryan Reynolds (Van Wilder, Blade:Trinity) as Deadpool, Taylor Kitsch (Snakes on a Plane) as Gambit, Danny Huston (The Kingdom, The Constant Gardner) as Colonel William Stryker, Dominic Monaghan ("Lost," The Lord of the Rings Trilogy) as Bolt and Black Eyed Peas front man Will.i.Am as Wraith.

The X-Men Origins: Wolverine BD is loaded with over 2 hours of bonus material offering fans the opportunity to explore more of the Wolverine legend through commentary by director Gavin Hood and producers Lauren Shuler Donner and Ralph Winter, a conversation with Wolverine creators Stan Lee and Len Wein, deleted and alternate scenes, the most comprehensive documentary on the character to date, as well as being the studio's first ever release featuring "Live Lookup, an interactive BD-Live technology giving fans access to up-to-date filmographies and information related to the film via IMDb. Additionally, with Ultimate X-Mode featuring three distinct viewing experiences, viewers can watch the film in a multitude of ways including Picture-in-Picture commentary from the Director's chair; pre-visualization storyboards and character connections to other X-Men movies.

Leading up to the events of X-Men, X-Men Origins: Wolverine tells the story of Wolverine's epically violent and romantic past, his complex relationship with Victor Creed and the ominous Weapon X program. Along the way, Wolverine encounters many mutants, both familiar and new, including surprise appearances by several legends of the X-Men universe whose appearances in the film have long been anticipated.

The X-Men Origins: Wolverine BD is in widescreen with English 5.1 DTS HD Master Audio (Lossless) with subtitles including English for the hearing impaired.

The X-Men Origins: Wolverine two-disc special edition will include a DVD containing the feature plus an electronic transfer file of the film for a portable device (Digital Copy) and a second disc containing over 1 hour of special features. The feature is presented in widescreen and English 5.1 DTS HD Master Audio (Lossless) with subtitles including English for the hearing impaired.

Disc One
o Digital Copy of the feature