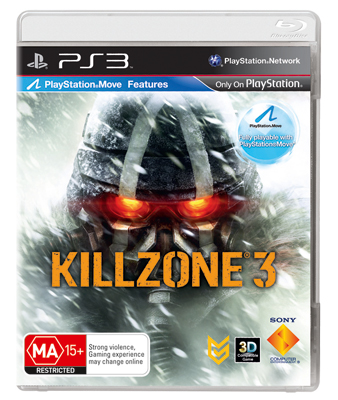 Sony Computer Entertainment Australia (SCE Aust.) today welcomes the return of the critically acclaimed multi-million selling Killzone® franchise as Killzone®3 arrives on PlayStation®3 (PS3™). Bringing back the trademark ferocious action on an even more deadly scale, Killzone 3 sees the battle continue between the Interplanetary Strategic Alliance (ISA) and the Helghast - one of the most unrelenting enemies ever to terrorise PlayStation.

In the most cinematically advanced Killzone yet, Guerrilla studios has introduced a huge visual upgrade to the third instalment in the franchise. New simulation and texturing technology make for a dramatic array of special effects - from waves crashing over your head to devastating vehicle explosions. And with no loading screens in between gameplay to pull you out of the story, Killzone 3 feels more like a feature length film than a video game. See the story unfold before you in a flurry of High Definition, 3D splendour, brought to life with a terrifying audio soundtrack from Hollywood's most legendary bad boys. Malcolm McDowell, famed for his dark performance as Alex in A Clockwork Orange, expertly portrays the voice of sadistic Helghast warlord Jorhan Stahl. And London-born Ray Winstone, known for his mobster roles in blockbusters like The Departed, provides the voice of Admiral Orlock.

Fully PlayStation®Move compatible, you'll feel even closer to the action in a nerve-shatteringly immersive experience. Look your enemy in the eye as you get up close with the brutal new close-combat system, or seek refuge from the Helghast onslaught as you take time out to manually reload - all using the Move controller. The arrival of the PlayStation Move sharp shooter in Australia next month, will only add to the immersive experience - taking out the Helghast has never felt more realistic! Housing the motion controller and navigation controller, the sharp shooter, developed by Guerrilla Games and Zipper Interactive, provides the most intuitive and immersive control experience yet.

Prepare to face your toughest challenge yet as the ferocious world of Killzone 3 arrives on PS3™. But be careful - once you experience the harrowing world of Helghan in fully Move® compatible eye-watering High Definition 3D detail, you'll soon fear what's around every corner.

Find out more at www.killzone.com

Buy it now at Dick Smith