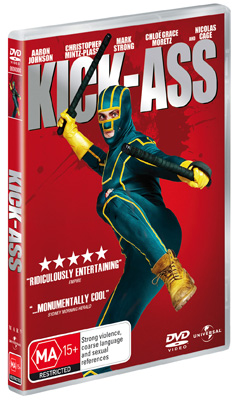 I can't read your mind but I can kick your ass, prepare for a wild action movie unlike any you've ever seen as Kick-Ass is released to Blu-ray and DVD. The most talked about movie of 2010 is based on the comic book written by Mark Millar and John S. Romita JR.

Directed and co-written by Matthew Vaughn (upcoming X-Men: First Class), this action flick centres on a group of unlikely crime fighters battling all evil doers who prey on the weak. With star turns from Aaron Johnson (Nowhere Boy), Christopher Mintz-Plasse (Superbad) and Mark Strong (Robin Hood), along with the dynamic fatherdaughter duo played by Chloë Grace Moretz (upcoming Let Me In), and Nicolas Cage (National Treasure series), you'll have stars in your eyes after this arse-kicking!

Dave Lizewski (Johnson) is a normal teenager who is unnoticed in the real world, but secretly feels he can offer society more. Seizing his chance to "do something", he dons a mask to come a 'real superhero' and right the wrongs of society. Bruised and beaten after numerous misadventures, he is saved by the father-daughter duo of 'Big Daddy' and 'Hit-Girl' who know all the right moves and have vicious crime-lord D'Amico in their sights.

Society's reaction to Kick Ass goes against the business interests of D'Amico and action kicks off when he wants to meet the masked man. When D'Amico's son suits up as 'Red Mist' to discover the identity behind his father's new nemeses bones get broken!


Special Features:
It's On: The Comic Book Origin of Kick-Ass
Feature Commentary with Director Matthew Vaughn