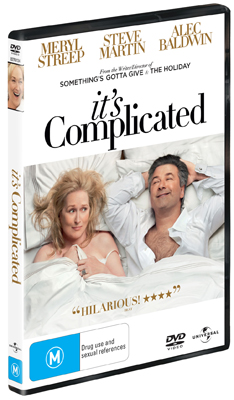 Academy Award® nominated queen of the romantic comedy, Nancy Meyers (What Women Want, Something's Gotta Give) directs Meryl Streep, Alec Baldwin and Steve Martin in It's Complicated, a comedy about love, divorce and everything in between.

Jane (Streep) is the mother of three grown kids, owns a thriving Santa Barbara bakery and, after a decade of divorce, has an amicable relationship with ex-husband Jake (Baldwin). But when Jane and Jake find themselves out of town for their son's graduation, things start to get complicated.

After a bottle of wine and a few moments of reminiscing, Jane and Jake begin a whirlwind, impulsive affair. With Jake now remarried to someone much younger, Jane is now the 'other' woman!

Caught in the middle of this complicated romance is Adam (Martin), Jane's architect. A divorcee himself and falling for Jane, Adam soon gets caught up in an unusual love triangle.

In classic Nancy Meyers' style, It's Complicated is a smart and heart-warming journey into the lives of three very different people all dealing with divorce, life and new love. A romantic comedy for young and old.