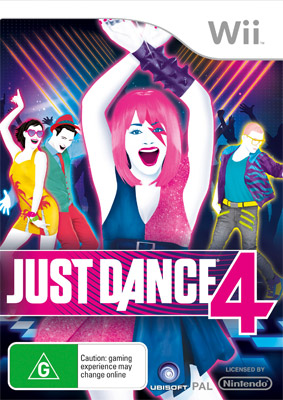 The worlds #1 dance game brand is back with Just Dance 4!

The latest edition of the record-breaking franchise takes the party to a whole new level of fun, with over 40 all-new hits, the coolest dances and brand new features.

Just Dance 4 is a must for the best parties, no matter what the occasion, thanks to innovative modes like the all-new Battle mode, an upgraded Just Sweat mode, and even more fun, alternative dances.

Everything players know and love about Just Dance gets even better with Just Dance 4 - hot new tracks, fun irreverent dances, and more.

Just Dance 4, available to own on Wii™, Wii U™, Microsoft Kinect™ for Xbox 360® and Sony PlayStation® Move for PlayStation® 3

Review: Not sure what to buy this Christmas, please add this to the list. It's the most fun you will have with your Wii, Xbox or Playstation.


Ubisoft® has announced that "Gangnam Style," by South Korean rapper PSY, will be available as downloadable content (DLC) for Just Dance® 4.

Just Dance 4, the latest instalment in the world's No. 1* dance game franchise, launched worldwide earlier this month and Gangnam Style marks the latest DLC track for the game. With more than 480 million views since its July debut, the Gangnam Style music video shot into YouTube's list of top ten most-viewed and has become a worldwide hit with politicians, athletes, celebrities and fans joining in and dancing along to the iconic dance moves.

"We're dedicated to bringing Just Dance fans access to the music and musicians they love," said Geoffroy Sardin, Chief Marketing & Sales Officer, Ubisoft EMEA. "Our fans were really vocal about wanting Gangnam Style in Just Dance 4 and we listened. This marks the first of many hot upcoming DLC tracks for Just Dance 4."

Just Dance 4 features more than 40 new tracks, ranging from chart topping Billboard hits to classic dance party tracks. Whether it's pop, Hip-Hop, rock, R&B or funk, there is something for everyone!

Just Dance 4 also includes an array of fresh new features and a game mode, including:

Battle Mode: in the all new Battle Mode, friends go head to head with each other in six rounds of dance battles. During the battle, the choreography and music changes in real time, depending on who is currently winning or losing. The ultimate winner gets bragging rights until the next dance battle.

Alternate Choreographies: players have the chance to unlock alternative dance routines for some of their favourite tracks. They can opt for more challenging, faster-paced routine or more outlandish choreography, depending on their mood.

Expanding Just Sweat Mode: the popular Just Sweat mode gets a major upgrade with new workout sessions, personalised programs and a calorie counter to track your workout intensity. With Just Sweat, players stay fit while having fun - it's exercise in disguise!

Nintendo Wii U-exclusive Features: The Wii U version introduces up to 5-player gameplay with an exclusive Puppet Muster Mode. The Puppet Master Mode allows the player operating the new Wii U GamePad™ to switch dance routines that are being performed by the four other players in real time. In this mode, the operator has the power to create choreographies and choose playlists for the other plays to follow. In addition, the operator also has the ability to write on-screen live dedications and take pictures and videos of the best dance moment to share online.

For the latest information on Just Dance 4, please visit: www.justdancegame.com