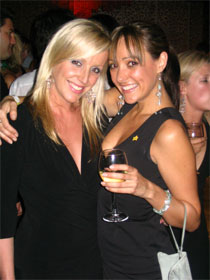 The Young Starlight Committee is bringing Sydneys hip socialites and celebrities together to sip cocktails and raise funds for the Starlight Childrens Foundation.

The cocktail party will be held on Thursday 11 August 2005 from 7.3011.30pm at Loft Bar, King Street Wharf, 3 Lime Street, Sydney. Tickets are just $85 and include canapés, alcohol and entertainment.

According to Young Starlight Committee Chairperson, Natalie Benke, as well as being for a great cause the cocktail party is guaranteed to be a stylish affair and a great night out.

"Last years cocktail party at the Loft was such a huge success with Sydneys party crowd and celebrities turning up to help raise much needed funds for the Starlight Childrens Foundation, that we decided to make it an annual event on our calendar," says Benke.

'"Were expecting it to be a really fun night with even more people this time and are hoping to raise a substantial amount which will go directly to helping brighten the lives of seriously ill children."

"As an organisation, Starlight relies entirely on the generous support of people and businesses in the community so we encourage everyone to buy a ticket to the cocktail party as all funds raised will go towards Starlights many programs, plus its a great excuse to have some fun!" says Benke.

In the next 12 months 600,000 children will be hospitalised in Australia. Currently Starlights programs touch the lives of 200,000 seriously ill children and their families, providing much needed distraction through Starlight Express Rooms featuring the wonderful Captain Starlight, Starlight Fun Centres and Starlight Express Vans, Starlight Escapes and the Starlight Wishgranting program. But many more children are in need of some Starlight magic. Currently 539* children with a critical, chronic or terminal illness are awaiting their Starlight wish (* as at June 05).

To purchase Loft Cocktail Party tickets, make donations or for any enquiries contact Natalie Benke on 0419 529 089 or Cherie Carroll on 0438 633 458 or visit www.starlight.org.au