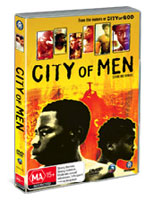 Special Features: City of Men includes the revealing bonus feature 'Building the City of Men', a 15 minute inside glance at the making of City of Men.

In the shanty towns of Rio de Janeiro where every day is a battle for survival, two friends are struggling to come to terms with the harsh realities of the world they live in, and find themselves on opposite ends of a gang war that will change everything.

In this the hard-hitting sequel to the acclaimed City of God, released in 2000, City of Men is one of the most anticipated action-packed foreign films of 2008 and is now available on DVD.

Produced by Fernando Meirelles, City of Men reunites many of the creative team members behind the Academy Award nominated feature City of God, including the two stars of City of Men, Acerola (Douglas Silva) and Uolace (Darlan Cunha ) both of who had roles as boys in City of God, and grew up in the shanty towns (favelas) of Rio.

City of Men begins with Maceerola and Uolace about to turn 18, finding themselves on the verge of adulthood, and fighting for survival in an unforgiving world. Acerola is struggling to raise a child while Uolace sets out to discover the truth about his estranged ex-convict father. Drawing on the strength of their friendship they had found that means to survive, but soon their brotherhood will be tested to the limits as they are drawn into a gang war against each other.

Overrun by gangs and poverty, City of Men, is inspired by the everyday life of the favelas, and what it takes to survive and raise a family on the other side of paradise.