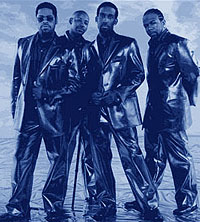 Their debut album released in 1992 titled "Cooley High Harmony" sold over 12 million copies worldwide and stayed on Billboard's Pop charts for over a year.

Their professional success is phenomenal and is reflected in the number of sales for "Cooley High Harmony" and "Boyz II Men II": 40,000,000 copies worldwide.

Their Christmas album, "Christmas Interpretations", released in 1993 is multi-platinum and increasing.

On September 26th, 1995, they set off on an "All Around The World Tour", where they performed in over 150 concerts to sell-out audiences around the world.

This landed them in the Forbes Magazine, where they were listed among the highest paid entertainers:

They have performed for the president, sung at the "Nobel Peace Prize Concert" in Oslo, Norway in 1997 and sung the National Anthem at the closing Ceremony for the Atlanta Olympics.

There are so many achievements that Boyz II Men have accomplished that it's amazing to think that they were once just four "regular guys".

They have definitely made a profound impact on Pop and R&B music throughout the world, which is not bad for a couple of guys from Philadelphia, who made tremendous sacrifices to pursue their dreams, not knowing whether or not they would be realized.