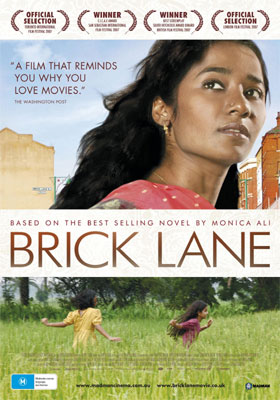 At the tender age of seventeen, Nazneen's life is turned upside down. After an arranged marriage to an older man, she exchanges her Bangladeshi village home for a block of flats in London's East End. In this new world, pining for her home and her sister, she struggles to make sense of her existence - and to do her duty to her husband. A man of inflated ideas (and stomach), he sorely tests her compliance.

Told from birth that she must not fight her fate, Nazneen submits, devoting her life to raising her family and slapping down her demons of discontent. Until the day that Karim, a hot-heated local man, bursts into her life. Against a background of escalating racial tension, they embark on an affair that finally forces Nazneen to take control of her life.

Set in multicultural Britain, Brick Lane is a truly contemporary story of love, cultural difference, and ultimately, the strength of the human spirit.

Swing little girl on your swing. Comb your beautiful hair. Your bridegroom will comesoon. And then he will take you away.

Nazneen and her sister Hasina play a game of chase, teasing each other whilst runningthrough the vibrant green paddy fields of their Bangladesh village home. Reaching theirhouse they see their mother sitting abject and alone. Nazneen's approach to her isrebuffed and she is drawn back to the fields to play with her sister. While they splash inthe nearby stream with a group of local boys, their mother appears in the distancecarrying a large pot. She walks towards the river and descends into it, ties a ropearound her neck and fills the pot with water which instantly pulls her under, her red sarifloating dramatically across the surface. Noticed by other women washing clothesnearby, the alarm is raised. Nazneen is attracted by the cries to push through thecrowd and see her mother being dragged out of the water, dead.

Some time later, the sisters look out mournfully from the steps of their house, throughthe monsoon rain. Their father approaches and sternly tells them to go inside. Adecision has been made.

Nazneen (now 17) resplendent in yellow sari and traditional wedding make-up is fussedover by the local women whilst Hasina (14) stands apart. Their father brings out apicture of the man Nazneen is to marry - an older man, far away, in London. The twosisters walk hand in hand to the river's edge, the golden sun illuminating Nazneen'ssorrow as she steps on to the tiny boat that will take her away from her sister and home.Hasina turns and runs off as Nazneen drifts away, a single tear falling form her eye.Sixteen years later, Nazneen walks down Brick Lane, a solitary figure carrying hershopping past familiar shops, the mosque and the curry houses, whilst the full ethnicmix of East London carries on its business around her. She turns into a dramatic redbrick estate, walks across the courtyard, up the stairs and enters the flat which has nowbecome her home, and home to her two daughters Shahana (14) and Bibi (10) and toher husband, Chanu.

Breakfast time and Chanu leaves for work, hopeful, in his indomitable fashion, that hewill hear news of the promotion that he believes will finally vindicate his years ofstruggle for acceptance in England. A letter has arrived from Hasina. With Chanu andher daughters gone, Nazneen sits to read the latest tales of her sister's adventures inlove back home in Bangladesh. Venturing out onto the walkway, she notices a newneighbour, Razia, talking to Mrs Islam, an older member of the community. Razia,although Bangladeshi, doesn't wear a sari and with her short hair and brash mannerintrigues Nazneen. Razia moves her belongings, including a sewing machine, into hernew flat. Shyly, Nazneen says hello and returns to her domestic chores. Chanu comeshome defeated, as he has been passed over once again for promotion. He announcesthat he has resigned in protest. azneen's dreams of returning to Bangladesh to be withHasina are shattered.

The following day, from her window, Nazneen sees a young British Bangladeshi man,Karim, bringing a fresh batch of sewing work to her new neighbour. 'Some of thewomen are sewing at home', Nazneen tells Chanu who completely ignores thecomment and its implication. Later, running into Razia on the estate, she is invited backfor tea and Razia generously gives Nazneen her old sewing machine. Nazneenrealises she can help the family return to Bangladesh with her own efforts. Chanureacts badly to the idea of his wife working and retires with a scowl to the bedroomtaking the TV with him. A few days later, Karim, knocks at her door carrying the firstbatch of sewing for Nazneen. Karim is handsome and radiant with the idealistic energyof youth.

Over the next months as spring turns to summer, they talk and grow close. Karimintroduces Nazneen to the outside world through the community meetings with which heis involved. She learns about him building local strength to defend the interests of theBengali community against the racist organisations who are attempting to destabilisethe area - namely one group, the Lionhearts.

One day, while Nazneen shops in the local market, Karim brushes past her and entreatsher to follow him into his uncle's empty factory. Amongst the piles of sewing and therows of machines, they kiss. Transformed by her first experience of love, Nazneenfloats through the summer coping with the difficulties of her life: the debts that Chanuhas incurred by borrowing money from Mrs Islam; the dissatisfaction of her teenagedaughter Shahana - who is resisting the notion of moving to Bangladesh; and theletters from her sister which hint at troubles in love and life there.

Summer turns to autumn. Irrepressible as ever, Chanu has found a job as a taxi driverto 'raise money for the home fund' and a jolly family day out to Buckingham Palaceheralds the end of a period of tranquillity. Walking down a sunny Brick Lane, Nazneenis glowing with hope and confidence as she sees her lover in the street. But as theynear each other they are distracted by a crowd gathering to watch a TV screen inside alocal café. They both turn to see the terrible spectacle of the second plane screaminginto the Twin Towers and are brutally awoken from their relationship dream.

At home, as the family watch those fateful images over again, Chanu is more agitatedthan ever - fearful of a racist backlash and determined that now is the time to leave forBangladesh. The days that follow are anxious for Nazneen as she copes with thefallout from 9/11. A series of incidents on the news and on the estate culminate inChanu returning home unexpectedly to find Nazneen sewing and Karim in Chanu's seatat his computer. It is clear to Chanu what has been going on between them, but hemakes a dignified exit.

Later that evening, in retaliation, Chanu confronts his wife with the truth about hersister's adventures in love - that she is living as a prostitute. The realisation of this truthprovokes an emotional breakdown for Nazneen. Frantically she scours her sister'smany letters. The names and phrases within them take on new meanings that trigger aflood of memories and images - of her sister, of Karim, of Chanu and of her mother'sdeath. A collage of pain and the toll of years of endurance combine to bring on adramatic physical collapse. When she wakes days later, the world appears to havereturned to normality. Chanu is cheery - he has bought the tickets for Bangladesh andhas started to pack. Karim is nowhere to be seen and the family is facing an uncertainfuture together.

As the winter progresses, the time to leave for Bangladesh draws ever closer andShahana increasingly challenges her father's authority. Karim returns, now with a beardand the serious air of a more politicised Muslim. He offers Nazneen his hand inmarriage as a way of legitimising their situation. Chanu then decides to attend one ofthe community meetings organised by Karim and asks Nazneen to accompany him. Inthis highly charged atmosphere, Chanu makes an emotional, personal statement aboutIslam and brotherhood which strikes a very different note to the prevailing radicalism ofthe meeting. Nazneen begins to understand the reality of both men. She loves themboth in different ways, but her future is with neither. She meets Karim in the street andmakes a final break with him. Returning to the estate, she sees Mrs Islam waiting at herdoor. Mrs Islam demands the money that Chanu owes her. A new and clearlyempowered Nazneen resists, stating they have paid back much more than wasborrowed. She challenges Mrs Islam to prove that she is not a usurer by swearing onthe Koran. Mrs Islam threatens to reveal Nazneen's secrets to her husband, but isfaced down by Nazneen who wins another significant battle to determine her fate.As Chanu dismantles the last of the furniture, the boxes all packed ready to leave,Shahana confronts him with her passionate pleas to stay. This is their home - neitherher, Bibi nor Nazneen want to live in Bangladesh. She urges her Mother for once in herlife to voice her own wishes. When Nazneen does not, Shahana runs out of the flat andinto the streets below. After a moment's hesitation, Nazneen follows in a dramaticchase through the night time streets. Distant memories of her childhood chases withher sister are evoked as she runs down Brick Lane and out into the City, ending in theneon lit glare of Liverpool Street Station. She clasps her daughter to her and, in thatmoment, it is clear to her that she should stay.

Nazneen tells Chanu that he must go but that she cannot. Tearfully and with greatdignity he accepts the situation acknowledging her strength and still with a hope thatthey may be together in the future. The following day he leaves, alone, watched byNazneen and their daughters as the first flakes of winter snow drift in the air.

Waking with her daughters in the empty flat, Nazneen looks out of the window into thebright, winter sunlight. In a rush of excitement, they leave the flat and run down to thecourtyard below to find it magically transformed by a deep layer of snow. Laughing andplaying, the three lie down and make angels in the snow as far above a plane goesacross the blue sky. Nazneen gazes up, looking ahead into a future that may beuncertain, but that is now hers alone to determine.