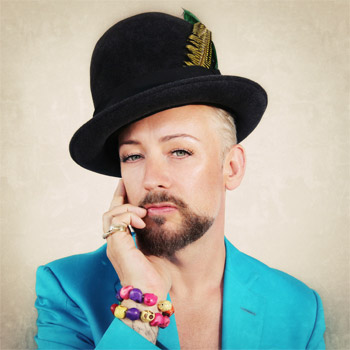 Boy George, universally recognised as one of our generation's most iconic artists, will make a flying visit to Australia next week, March 9th to 11th.

He'll kick off in Brisbane, headlining Big Gay Day with a DJ set on March 9, before undertaking promotional activity for his new album, -This Is What I Do'.

-This Is What I Do', a thrilling new studio album of original material, is his first in 18 years and has been released on his own -Very Me' Record Label via Kobalt Label Services.  It will be accompanied by a brand new single, -King Of Everything' - the beautifully melodic track impacts media today. The video for -King Of Everything' tells the story of a gorgeous boxer and his disappointed wife; whilst the story is not about George, the O'Dowd family does have strong links with the sport.

-This Is What I Do' features a string of guest musicians including DJ Yoda, Kitty Durham (Kitty Daisy & Lewis), Ally McErlaine (Texas / Red Sky July), MC Spee (Dreadzone) and Nizar Al Issa, many of whom will perform as George's band on his live dates.

Says George: 'I wanted to make a baggy album, not overproduced and I think I have achieved it. I was listening to things like 'Beast Of Burden' by The Stones' and I had my head most definitely in the 70s. Richie's approach was very organic and he's the best drummer in the country so the feel of the record was so locked in from the start. I worked with a bunch of musicians who I have toured with and written with for the past fifteen years and dragged in a handful of others to guest on certain tracks like bassist Jennifer Maidman, Ally McErlaine from Texas and Kitty Durham from Kitty Daisy & Lewis who came and played harmonica. I was also writing from a happy place. This time, no ex lovers to get revenge on. For me 'Bigger Than War' sums up the tone."

Boy George needs little introduction. With a career spanning over 30 years he first shot to international stardom in the 1980's as the front man of one of the UK's biggest exports - the Brit & Grammy Award winning Culture Club - and has had continued success as a solo artist.  He has sold over 150 million records with top 10 hits in every country.   Boy George is also a hugely respected house DJ, playing for twenty years, and continues to DJ successfully in clubs all over the world.  However it is his new album, -This Is What I Do', that reinforces his first true love, writing & singing.

-This Is What I Do' Track listing: